Sept. 16, 2013: We've scoured the Web to find the best and most compelling animal stories, videos and photos. And it's all right here. 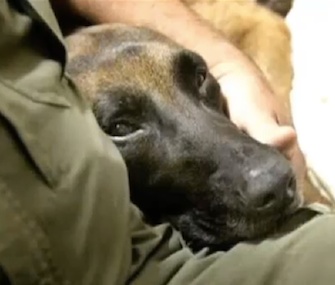 WRCB
Ely, a police dog, is recovering thanks to a blood transfusion from Buddy, a dog in need of a home.

Ely, a police dog in Rutherford County, Tenn., has been making a remarkable recovery since getting a blood transfusion from Buddy, a rescue dog. Ely was helping his handler search for a shooting suspect last week when he showed signs of distress from the heat. Deputies gave him a rest and water, but the 3-year-old Belgian Malinois soon collapsed. He was brought to the Williams Animal Hospital for treatment, and after his blood platelets dropped and he started to hemorrhage last Monday, he got a blood transfusion from Buddy, a 6-year-old Shepherd mix who’s in need of a home. The transfusion “really turned [Ely] around. It was the last little thing he needed to turn the corner,” said veterinarian Jean Lavalley. Ely is now on “light duty” at the sheriff’s office while vets keep a close eye on his health, and his fellow officers are hoping to help find a home for Buddy to show their gratitude. — Watch it at Tennessee’s WRCB

When Muriel Siebert, the first woman to hold a seat on the New York Stock Exchange, died last month at age 84, she left her little dog with a big inheritance. Monster Girl, a long-haired Chihuahua, was left to Siebert’s friend, Lynda Fox-Frazer, along with $100,000 for her care — and the request that her dog “not be left alone for long periods of time during the day.” Siebert also left $10,000 month to the Animal Medical Center in Manhattan for the duration of Monster Girl’s life, and $48 million to her own foundation, which teaches people about financial literacy and the “humane support of animals.” — Read it at New York Daily News

The staff at the Turtle Hospital in the Florida Keys turned to a dentist for help in repairing a 10-inch split in an endangered green sea turtle’s shell. Officials believe Elena, a 40-pound, adolescent turtle washed up on shore at a Key West beach after being hit by a boat. The staff was having trouble getting things to adhere to Elena’s shell. Dentist Fred Troxel used acrylic resin to bond two metal orthopedic plates across the turtle’s shell last week — and so far, it seems to be working. Hospital manager Bette Zirkelbach said she’s optimistic that Elena will be released in to the wild some day, but she still has a long road to recovery. — Read it from the AP via the Huffington Post 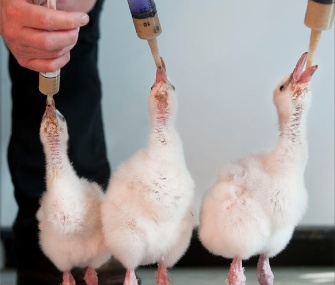 Four endangered Chilean flamingo chicks are being fed through syringes at the U.K.’s Longleat Safari and Adventure Park. Adult flamingos lay a single egg, and usually sit on it for about a month before it hatches. But keepers at Longleat think that a violent thunderstorm forced all of their parents to abandon their eggs when they took cover, so they were carefully removed from their nests and artificially hatched in an incubator. “All four chicks are now almost a month old and doing extremely well, although they are keeping us busy as each one has to be fed up to five times a day,” said Longleat’s Mark Tye.

The new father to 2-month-old Prince George is leaving his post as a military search and rescue helicopter pilot to take up more charity work — including bringing together seven top conservation organizations under a group called “United for Wildlife.” Prince William will serve as president of the group, which he hopes will "provide the impetus for a renewed commitment and action to protect endangered species and habitats for future generations." In a documentary aired by CNN and Britain’s ITV, William explained his feeling about endangered animals. "The wildlife is incredibly vulnerable and I feel a real protective instinct, more so now that I am a father, which is why I get emotional about it.” — Read it at Paw Nation