March 18, 2014: We've scoured the Web to find the best and most compelling animal stories, videos and photos. And it's all right here. 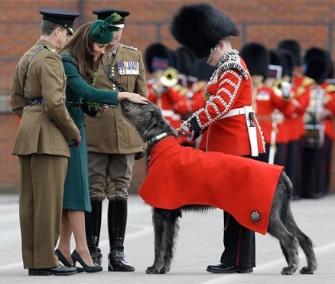 Prince William and Kate Middleton were in Aldershot, England, on Monday to present sprigs of shamrocks to members of the 1st Battalion Irish Guards for a St. Patrick’s Day parade at Mons Barracks. The Duchess of Cambridge handed out more than 300 sprigs to guardsmen and officers, but she saved one of her biggest smiles for the battalion’s last member — a 19-month-old Irish Wolfhound named Domhnall (pronounced Donal). The dog-loving princess petted the Irish Guards’ mascot on the head before pinning the shamrocks to his handsome red coat. Domhnall took it all in stride. “All done and dusted for another year, time to hit the Naffi for a Guinness or two, Happy St. Patrick’s Day,” the pooch later said on his Facebook page. — Read it at People Pets

Were Cats Domesticated in Ancient Egypt?

Bones from six cats, including four kittens, have been found in an Egyptian cemetery, and could push the timing of cat domestication back by 2,000 years. The cemetery in Hierakonpolis, the capital of Upper Egypt before the era of the pharaohs, was a burial place of both humans and animals. Archaeologists said the size of the bones and timing of the litters they came from hints that humans may have kept the cats. The bones date to between 3600 and 3800 B.C., which would be about 2,000 years before the earliest known evidence of cat domestication in Egypt. "The last word on cat domestication (when and where) is not yet said," said Wim VanNeer, a bioarchaeologist at the Royal Belgian Institute of Natural Sciences and Catholic University. The study was published in the Journal of Archaeological Science. — Read it at Live Science

The biggest headlines in Sin City recently haven’t been about casinos or foreclosures. Instead, residents of Las Vegas are paying close attention to the controversial fate of 25 puppies and two adult dogs who were saved from an alleged attempted arson at an upscale pet shop, Prince & Princess. After a fire broke out at the shop in January, security video showed a woman letting a man in the back door, and the man dousing the place with gas. A sprinkler system put out the fire and firefighters rescued the dogs. One of the shop’s owners, Gloria Eun Hye Lee, was arrested, and she faces dozens of charges including arson and attempted cruelty to animals. Now, the dogs are in limbo as the non-profit Animal Foundation and Lee’s estranged husband, Donald Thompson, battle over their custody. Thompson’s attorney said he wants the animals to be transferred to a rescue group that would place them with families after a detailed vetting process. He and some animal activists were unhappy with the Animal Foundation’s plan to charge their usual adoption fee of $250 for raffle tickets for a chance to adopt the dogs. — Read it from The New York Times 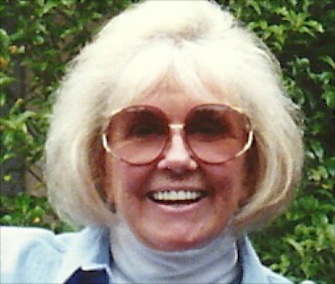 The legendary actress Doris Day says she’s not much for birthdays, but she’s “all about the four-leggers.” So, for her 90th birthday on April 3, she’s asking her fans to make a donation to her Doris Day Animal Foundation, or to bid on the items in an online charity auction. There will also be a live auction at the star’s birthday celebration in her hometown of Carmel, Calif. Up for bidding are items signed by Paul McCartney and Tony Bennett, a Stella McCartney Falabella bag, as well as a handbag and scarf from Day’s personal wardrobe. “Turning 90 is a milestone, for me and for the Foundation, and we’re setting a goal of $90,000 in donations,” Day said.“There is so much work still to do to rescue animals, and to inform people about the importance of spaying and neutering their pets,” Day said.The online auction is open until April 1. — Bids can be made at the Doris Day Animal Foundation Online Auction

NFL Coach Does Pushups — With a Walrus

Is San Francisco 49ers coach Jim Harbaugh doing some unusual recruiting in the NFL off-season? A new video shows him doing pushups with Siku, a 1,750-pound walrus who lives at Six Flags Discovery Kingdom, north of San Francisco. Harbaugh visited the park with his family on Sunday, when Siku showed off her skill at exercising. The coach also got the chance to bottle feed a tiger, feed bananas to an elephant and kiss a sea lion. — Watch it at the Huffington Post