Dec. 31, 2014: We've scoured the Web to find the best and most compelling animal stories, videos and photos. And it's all right here. 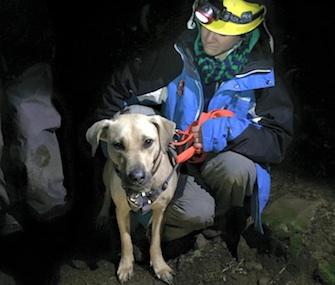 David Schelske was taking his 3-year-old Labrador Retriever, Sandy, on a Christmas afternoon hike in Oregon’s Columbia River Gorge when the dog was startled by something on the trail. She ran so hard that she snapped her leash. Seeing no sign of her around a bend in the trail and fearing the worst, Schelske hiked to the bottom of the cliff and spotted Sandy trapped on a ledge where he couldn’t reach her. Eight volunteers from the Oregon Humane Society arrived on the scene at 7 p.m. Volunteer John Thoeni rappelled 150 feet down a sheer cliff in the dark to find her. Sandy was frightened but had only minor injuries. He fitted her with a rescue harness, and they were hoisted to safety together. Back at the top, Sandy was reunited with her owner, and they hiked back to the trailhead together, arriving at about 11:30 p.m. "What happened was incredibly bad luck, but then we had incredibly good luck when she was saved," said Schelske. He said the rescue team is “an amazing, dedicated group of people. I wish I could give them all a big hug." — Read it from the AP via People Pets

Although a lot of attention has been focused on how dogs can help improve the social skills of children with autism, a new study from the University of Missouri-Columbia finds that any kind of pet in the home can help. “The data revealed that children with any kind of pet in the home reported being more likely to engage in behaviors such as introducing themselves, asking for information or responding to other people's questions,” said researcher Gretchen Carlisle. “These kinds of social skills typically are difficult for kids with autism, but this study showed children's assertiveness was greater if they lived with a pet." She also found that children bonded more strongly with smaller dogs, and parents reported strong attachments with other pets, including cats and rabbits. The study was published in the Journal of Autism and Developmental Disorders. — Read it at Science Daily

Twitter user @theregoesbabs says she was seated on a plane when she snapped a picture of a dog in its kennel sitting on the tarmac at Houston’s George Bush International Airport. She Tweeted the photo, writing “Evil United Airlines leaves dog on rainy cold runway for more than a half hour despite alerts to staff :-((((( boo” A social media backlash against United Airlines came quickly. The airline responded on its Twitter account, saying, “Thanks for telling us. The weather can change & may have been clear when PetSafe dropped off. They're the ones to call too.” They also said that temperatures were in a safe range for pets to be outside and insisted that despite how it looked in the photo, the kennel was under the plane’s wing to protect the dog from the rain. They said the dog made it safely to its destination. — Read it at WABC-TV New York 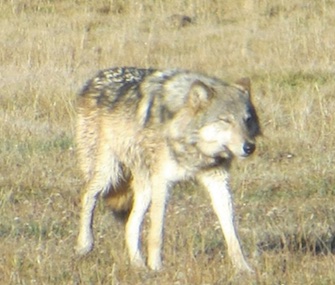 Center for Biological Diversity
Officials fear that a wolf who was mistakenly shot by a hunter in Utah may have been the same one who'd been spotted in the Grand Canyon.

In the fall, officials determined that the animal seen roaming the Grand Canyon in Arizona really was a gray wolf — the first to be spotted in the state in 70 years. But the endangered wolf, who’d trekked 500 miles to get to the area from Utah, may have been mistakenly shot Sunday in Utah by a hunter who thought she was a coyote. The hunter alerted the U.S. Fish and Wildlife Service when he realized the animal was a wolf, and the agency confirmed it was a 3-year-old female gray wolf. Gray wolves still get federal protections in some states, including Arizona and Utah. Wildlife groups are awaiting the results of DNA tests to confirm whether it was the female they’d been tracking in the Grand Canyon since October. The Grand Canyon wolf was named Echo in a children’s naming contest this month. "This was a worry of ours," said Michael Robinson, with the Center for Biological Diversity. "Personally, I'm very saddened by it." — Read it Live Science

Cat Reunited With Owner After 7 Years

Garfield was only 2 years old when he disappeared from his home in England. He’d apparently wandered back to the wrong home in 2008. Thinking he was a stray, the family took him in. Years later, they brought him to the Cats Protection Bridgend Adoption Center. The staff there discovered the cat had a microchip, and tracked down his original owner, Julie Calder. She had an emotional reunion with her pet Tuesday. "Julie just picked him up, something we haven't been able to do, and he proceeded to lick her face. Apparently he used to do this before he went missing. It was lovely to see,” said Sue Dobbs, the center’s manager. "I am over the moon to have Garfield back home after seven years ... He is going to be very spoiled now," said Calder. — Read it at the U.K.’s Telegraph