Home ›
Our Pet Experts ›
Amy Sinatra Ayres ›
Pet Scoop: Lab Rescued From the Side of a Cliff, Baby Gorilla Born Via C-Section

Pet Scoop: Lab Rescued From the Side of a Cliff, Baby Gorilla Born Via C-Section

March 17, 2014: We've scoured the Web to find the best and most compelling animal stories, videos and photos. And it's all right here. 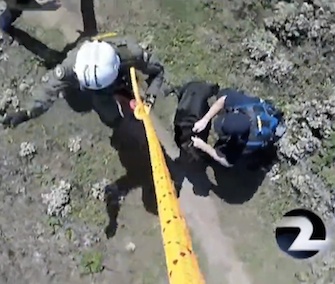 Sonoma County Sheriff's Department / YouTube
Oreo was rescued from the side of a cliff in California by a helicopter crew.

Authorities in Sonoma County, Calif., came to the rescue of a black and white Labrador Retriever mix who was stuck on a cliff along the Sonoma coast on Saturday afternoon. Oreo had somehow made her way down a narrow trail and become stranded on a 2-by-2-foot ledge about 40 feet down a 90-foot cliff. When Oreo’s owner called 911 for help, a helicopter was dispatched and quickly located the dog. Deputy Henri Boustany attached himself to the bottom of a 100-foot line strung from the helicopter and was flown to the ledge where the dog was standing. He was able to secure Oreo with the harness she was already wearing and the dog was flown back to the top of the cliff, unharmed. The rescue took less than three minutes, and a large crowd that had gathered cheered as Oreo was returned to her relieved owner. “She was a very happy lady,” Capt. Todd Rollings of the Bodega Bay Fire Protection District said of Oreo’s owner. — Watch it at California’s Press Democrat

Howard Buffett, a son of wealthy investor and philanthropist Warren Buffett, has pledged more than $24 million for protecting rhinos from poaching in South Africa. He’s earmarked the money for ranger teams, sniffer dogs and other security measures. The 3-year program will focus on a portion of Kruger National Park that’s home to 4,000 rhinos and struggles with poachers who cross over its border with Mozambique. It will use some of the methods used by the U.S. to monitor its border with Mexico. "This is an overwhelming issue,” said Buffett. — Read it from AP via Yahoo

Hank the Brewers Dog Gets a Home

The little dog adopted by the Milwaukee Brewers after he wandered on to the field during their spring training in Phoenix was welcomed to the Wisconsin city like a celebrity on Sunday. A crowd gathered at Mitchell International Airport wearing Brewers shirts with Hank’s picture and a cake welcoming the pooch as he got off a chartered plane with Brewers executives and sponsors. Among those waiting for him was the family of Marti Wronski, vice president and general counsel for the Brewers. Wronski and his four boys ranging in age from 5 to 11, get to bring Hank home. "The team adopted Hank first and foremost. We collectively decided to give Hank a home," Wronski said. — Read it at the Milwaukee Journal 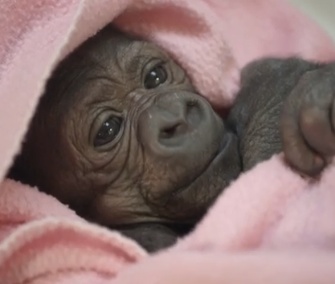 The animal care team at the San Diego Zoo Safari Park is closely monitoring a baby girl who was born on Wednesday night. First-time mom Imani, 18, had a rare emergency C-section when her labor wasn’t progressing naturally. The full-term baby weighed 4.6 pounds, but suffered some complications from her mom’s difficult labor. On Friday, she had surgery to fix a collapsed lung after veterinarians noticed her rapid breathing. The procedure, performed by San Diego Zoo veterinary staff with the help of a human neonatal specialist, was a success and she’s now breathing much better on her own. Meanwhile, Imani is recovering well from her C-section. “She’s a fighter,” the zoo said of the baby on its Facebook page Sunday. — Watch her on YouTube

There’s a pretty good chance that last week, you saw that video where 20 strangers were asked to kiss for the first time. Whether you found it cringe-worthy or romantic, we know you’ll find this spin-off cute. Jimmy Fallon debuted his own version of the viral video on Thursday: First Lick. The Tonight Show host and his team replaced the humans with puppies and kittens in an adorable reenactment. — Watch it at People Pets