Oct. 9, 2012: We've scoured the Web to find the best and most compelling animal stories, videos and photos. And it's all right here. 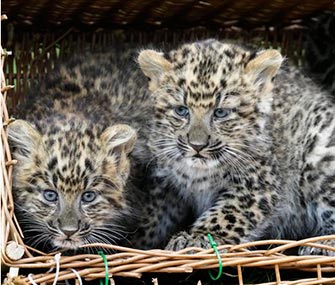 AP
Mor and May made their debut at the Tierpark Zoo in Berlin.

Twins Mor and May were presented to the public for the first time at the Tierpark Zoo in Berlin last week — peeking out of a basket. The cubs, who are part of a near-threatened subspecies of leopard that’s native to northern China, were born at the zoo on August 4.

A new study from the Woods Hole Oceanographic Institution in Massachusetts has found that the majority of whale deaths between 1970 and 2009 in the northwest Atlantic Ocean were human-related — and entanglement in fishing gear was the biggest culprit. Unfortunately, restrictions on fishing routes and speeds haven’t made a big difference in reducing mortality rates for the massive marine mammals. "So far, regulatory efforts have not reduced the lethal effects of human activities to large whales on a population-range basis,” said the report, which was published in Conservation Biology. — Read it at Live Science

Dedicated workers at a nature preserve in China wore panda costumes in order to catch a 4-year-old panda who’s been learning how to survive on his own. They were bringing him in for one last physical exam before releasing him into the wild. — Watch it at CNN 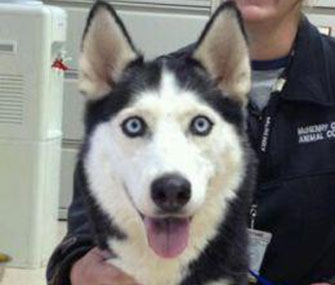 Shakira was just a puppy when she went missing from her Georgia home in December 2007. When her owner, Heather Jackson, got a call recently that her Siberian Husky had been found in Illinois, she was so excited that Jackson and her brother made the 700-mile, 14-hour drive overnight — and they were waiting outside the animal control office when it opened.

Shakira’s microchip, which a Georgia shelter had missed, was detected in a scan by Free Spirit Siberian Husky Rescue, an organization that had saved the dog from euthanization. “When she came around the corner, she ran straight to me and rolled over on her back and licked me on the face,” said Jackson of the reunion. — Read it at the Daily Herald

When Lydia the cat became sick in June, veterinarians in England initially treated her for a kidney infection. When she didn’t improve, they ordered an X-ray, and discovered that the 10-month-old kitty had swallowed a crucifix that had been dangling from her owner’s necklace. Lydia is doing well following tricky surgery to remove the item. "We do a lot of operations for balls and seaweed getting stuck, and coins too, but I've never seen anything quite as strange as this," said veterinarian Arlene Chappell. — Read it at People Pets