Oct. 19, 2012: We've scoured the Web to find the best and most compelling animal stories, videos and photos. And it's all right here. 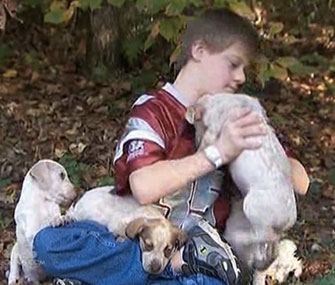 NBC News
Kyle Camp plays with the puppies who kept him warm while he was lost in the woods.

Kyle Camp is home safe and sound after being missing for 18 hours in the woods on his family’s 20-acre property in Alabama—thanks to a litter of puppies. The boy, who has Down syndrome, wandered off on Tuesday with four pups at his heels. More than 150 people gathered to search for him, but it was the mother dog who finally led volunteers to Kyle early Wednesday morning. Found about a half mile from his house, the boy was wet and wasn’t wearing shoes, but the puppies had snuggled close, keeping him warm throughout the chilly night. — Watch it at NBC News

Who needs coffee? A new study found that dolphins can sleep with only half of their brain, allowing them to stay alert for more than two weeks, regularly switching which side of their brain is active. This unusual phenomenon keeps the mammals from drowning and allows them to watch out for sharks, according to researchers from the National Marine Mammal Foundation in San Diego. The study, published in the online journal PLoS ONE, found that the dolphins could use echolocation with near-perfect accuracy for up to 15 days — and maybe even longer. "Dolphins can continue to swim and think for days without rest or sleep, possibly indefinitely," said researcher Brian Branstetter. — Read it at Live Science

How did the Pronghorn antelope cross the road? By using new overpasses designed by the Wildlife Conservation Society.The group spent years studying the route of the animals’ 93-mile migration between their wintering grounds in the Upper Green River Basin and summering grounds in Grand Teton National Park before constructing eight safe passages along a 13-mile stretch of U.S. Highway 191 inTrapper’s Point, Wyo., and surrounding areas. The structures“eliminate the danger of collisions and will help to preserve a spectacular element of our natural heritage — the longest mammal migration in the 48 contiguous United States,” said WCS scientist Joel Berger. — Read it at Montana’s Great Falls Tribune 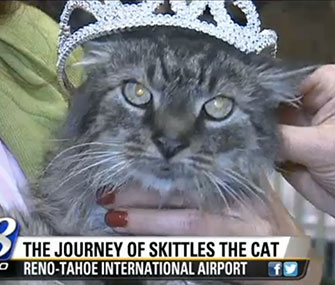 KOLO
Skittles' owner brought a crown to the airport for her long-lost kitty.

Skittles the cat was traveling in an RV with her owner’s relatives when she disappeared in September. While the RV was stopped at an Indiana state park on a trek from Pennsylvania to Nevada, the 15-year-old cat spotted a bird and popped out a window try to catch it, reported Indiana’s WANE. The family searched all over for the kitty but eventually had to move on, leaving information about their missing pet with park officials. Amazingly, six weeks after she disappeared, Skittleswas found by a park ranger in the woods in Ohio and nursed back to health by the Friends of Felines Rescue Center. With the help of donations from people all over the world who heard of Skittles’ story on the rescue’s web cam, the group bought her a plane ticket back home to Reno, Nev., where she was reunited with her relieved owner, Brenda Hershey, on Thursday. — Watch it at Nevada’s KOLO TV

Now 11 weeks old, the San Diego Zoo’s fluffy panda cub squeaked and attempted to walk at his weekly exam, reaching out with his front paws and lurching forward before tumbling over, “like a toddler holding onto the furniture,” said the zoo’s Dr. PK Robbins, DVM. You might be able to catch more of his walking efforts on the Panda Cam. — Watch it on YouTube