Oct. 8, 2014: We've scoured the Web to find the best and most compelling animal stories, videos and photos. And it's all right here. 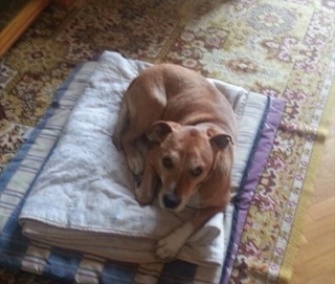 Change.org
A campaign to save Excalibur, a dog belonging to a Spanish Ebola patient, has gone viral.

Thousands Petition to Save Dog

Authorities in Madrid, Spain, plan to euthanize the mixed breed dog who belongs to Teresa Romero Ramos, a Spanish nursing assistant who is infected with the deadly virus Ebola. The plan has been met with outrage from thousands of people around the world, and a campaign to save the dog has gone viral. Spanish officials say there’s a risk the dog, Excalibur, could transmit the virus to humans. There’s been some evidence that dogs can get Ebola and concerns that people could be infected by animals. But CDC Director Tom Frieden said Tuesday, "We have not identified this as a means of transmission.” The patient’s husband, who is under quarantine, denounced the plan on Facebook. "If they are so worried with this issue I think we can find another type of alternative solution, such as quarantining the dog and put him under observation like they did with me," he wrote. More than 300,000 people have signed a Change.org petition to save the dog. — Read it at NBC News

A new study finds a population of chimpanzees living at a national park in Central Africa has figured out how to turn sticks into at least five different tools. “Our observations suggest that chimpanzees may have higher cognitive abilities in tool use than previously thought,” wrote study co-authors EbangEllaGhislainWilfried and JuichiYamagiwa. They found the chimps used sticks as: a pounder to retrieve honey from stingless bees; an enlarger to widen a hole such as the entrance to a beehive; a dip stick to eat honey off of; a fishing rod to eat termites who cling to the stick when placed in a termite pound; and as a poker to investigate a small animal hidden in a log. The study was published in the journal Primates. — Read it at Discovery News

A total of 68,805 animals’ lives were saved in the fifth and final ASPCA Rachel Ray $100K Challenge. In the contest, 50 shelters from around the country each had to save more dogs and cats in June, July and August than they did in the same three months last year. They do this with adoption promotions, lower fees, extended hours and more. The Central California SPCA in Fresno won the $100,000 grand prize this year by saving 2,640 dogs and cats in three months — an increase of 1,612 over the same time period last year. — Read it from the ASPCA 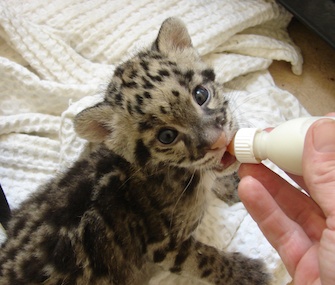 Keepers found Nimbus, a newborn clouded leopard cub, cold and alone on the floor of her exhibit at the Cotswold Wildlife Park in the U.K. after her mom abandoned her. They decided to hand-rear the cub, and she was taken home by curator Jamie Craig, so he could provide around-the-clock supervision. With the help of Craig and his family, Nimbus, who’s named for a cloud type, has become healthy, confident and boisterous. “She will eventually move into her new home, an enclosure adjoining the park’s clouded leopard adults, where she will remain until she is big enough to be safely reintroduced to one of her elder siblings,” Craig said. — See more photos at Zooborns

Royals Fan Gets Her Pup

During a Sept. 30 wildcard playoff game between the Kansas City Royals and the Oakland A’s, Royals fan Katie Castan held a banner over her head that read “If we win, he’s buying me a puppy!,” with an arrow pointed at her significant other and a picture of a Corgi wearing a crown. Well, they won, and she got her dog! The couple had planned to go to the Kansas City’s municipal animal shelter, but last week they heard from “a family of wonderful pet owners” who’d been trying to find a home for their 4-year-old Corgi, Lucy. “Since a Corgi is the dog of my dreams, we went to meet her and I immediately fell in love,” Castan told the Kansas City Star. Now Lucy has a new home with Castan. — Read it at USA Today