Dec. 18, 2013: We've scoured the Web to find the best and most compelling animal stories, videos and photos. And it's all right here. 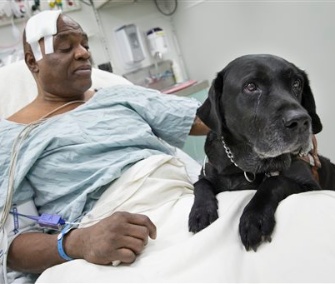 AP
Cecil Williams says his guide dog, Orlando, saved his life when he fell off a subway platform in Manhattan.

Blind Man and Dog Survive Being Struck by Subway Train

Cecil Williams, 61, emotionally credited his guide dog, Orlando, with saving him when he fell off a Manhattan subway platform before an oncoming train on Tuesday. Williams said he was on the way to the dentist when he started feeling faint. The Labrador Retriever tried to stop Williams from falling into the tracks. When he did fall, Orlando bravely jumped right down after him, nudging him to try to wake him and pull him out of the way, and barking for help as the train approached. The train slowed down but passed over both Williams and his dog. Thankfully neither was seriously injured. Williams was brought to a hospital where his loyal dog sat with him on his bed. "The dog saved my life," Williams said. Orlando, who turns 11 next month, will be retiring soon. Sadly, that means Williams will have to find a new home for the pooch, as his insurance will only cover the cost of a working guide dog, and as much as he would love to keep Orlando, Williams says he couldn’t afford to care for the dog on his own. "(He) gets me around and saves my life on a daily basis.” — Read it from AP via ABC News

A new report in the U.K. finds that ignorance about the sex lives of cats may lead to the births of more than 850,000 kittens every year. Unplanned litters increase the risk of health problems for the mother and kittens, the study’s authors said. Many mistakenly believed that a female cat should have one litter before being neutered, and some believed that the youngest age a cat could become pregnant was 12 months. “This study suggests that improving cat-owner knowledge of the reproductive capacity of cats is likely to have a significant impact on the numbers of accidental litters,” the authors said. The research was published in the journal Veterinary Record. — Read it at Science Daily

Despite objections from environmentalists, the National Marine Fisheries Service said Monday that it would give the Navy permission to intensify its sonar use in the Pacific over the next five years. The move is bad news for whales and dolphins. Scientists believe the sonar sounds scare the marine mammals into shallow waters, where they become disoriented and stranded. Biologists are also concerned that the animals could suffer prolonged stress because of changes in their behavior linked to the noise. — Read it at NBC News 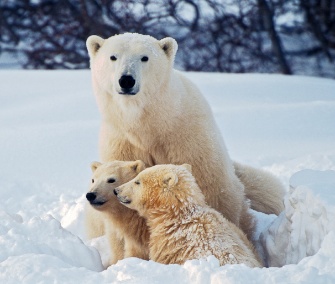 New research suggests that the advanced laser technology could be used to remotely identify polar bear dens, where cubs are raised during the harsh winter months in Alaska. Having knowledge of where the bears are raising their young could help protect them from oil and gas drilling, and give insight into the impact of climate change on the landscape, researchers said. The study was presented on Friday at the annual meeting of the American Geophysical Union in San Francisco. The threat that polar bears face from shrinking ice floes makes protection of the next generation of cubs even more important to the species’ survival, said study co-author George Durner, a research zoologist with the USGS Alaska Science Center. — Read it at Live Science

Stranger Risks Life to Save Kitten From House Fire

Andrew Davenport, a corrections officer, was returning to his home near Colorado Springs on Monday when he saw thick, black smoke coming from a residential area. The Good Samaritan arrived at the scene even before the fire department, and ran into the home to help anyone inside. There, he found a motionless kitten. Davenport didn’t hesitate to give the kitten mouth-to-mouth resuscitation, and “pretty soon she opened her eyes and came around," he said. The kitten and a Rottweiler, who also got out safely, were the only ones home at the time of the blaze. The owners later thanked Davenport for his help. "It's bad enough when someone loses their home this close to Christmas, but pets are members of the family. You can replace a home, but not a loved one." — Read it at Colorado’s Gazette