June 24, 2015: We've scoured the Web to find the best and most compelling animal stories, videos and photos. And it's all right here. 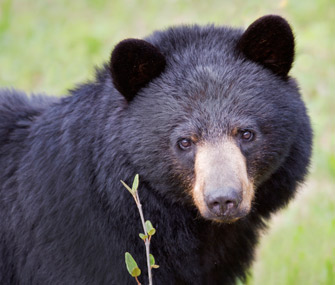 Thinkstock
A man sleeping on his deck in Colorado woke to find a bear nibbling on his ankle. (Actual bear not pictured).

Peter Rizutto was just catching some afternoon zzz’s on his deck in Aspen, Colorado, when he felt something start to nibble his ankle. Still sleepy, and believing the visitor to be a neighbor’s dog, he reached down and started to pet the animal. "I started petting it and saying 'nice doggy.' It then took my ankle but didn’t break the skin." Rizutto looked down at the animal's feet and to his surprise saw "these big claws with really beautiful nails, and at this time I realize he’s a bear." The man and the bear looked at each other, then Rizutto got up and went inside and the bear wandered off. Colorado Parks and Wildlife says they’d like to trap the bear and relocate it. — Read it at Huffington Post

This must be Find Wild Animals on Your Back Deck Week! A man posted a video on YouTube of his house cat staring down a mountain lion that had wandered onto his back porch —with only a sliding door between them. The lion tries to swat at the cat through the glass, but then hears a loud noise and is startled away. — Read it and see it on People Pets

Despite a widespread view that racehorse speed has plateaued, a new study finds they’re actually continuing to get faster. “There has been a general consensus over the last 30 years that horse speeds appeared to be stagnating,” said lead author Patrick Sharman of the Centre for Ecology and Conservation at the University of Exeter. “Our study shows that this is not the case and, by using a much larger dataset than previously analyzed, we have revealed that horses have been getting faster.” The next step is to look for a genetic basis in the speed increase, he said. The study was published in the journal Biology Letters. — Read it at Discovery News 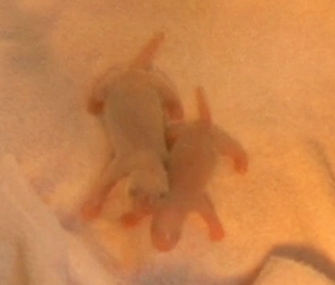 On Monday, a giant panda at China's Chengdu Research Base of Giant Panda Breeding gave birth to two female cubs, weighing 2.5 and 4 ounces. “They are healthy and their mother Ke Lin tried to embrace them after their birth," base chief Zhang Zhihe said. Seven-year-old Ke Lin was artificially inseminated in January and is the first giant panda to give birth to twins this year. — See it at NBC News

Matthew Fiorillo of Ballard-Durand Funeral Homes in White Plains and Elmford, New York, decided to add a therapy dog to his staff after a trip to the airport when his flight was delayed five hours. "Tempers were flaring and this woman walked by with a Maltese and I just watched this wave of calm come over everybody," he says. "I said, 'Wow, I have to implement this at the funeral home.'"According to Tech Times, Fiorillo’s on the cusp of a new trend, with more funeral homes across the country following suit. — Read it at People Pets