Oct. 11, 2016: We've scoured the Web to find the best and most compelling animal stories, videos and photos. And it's all right here. 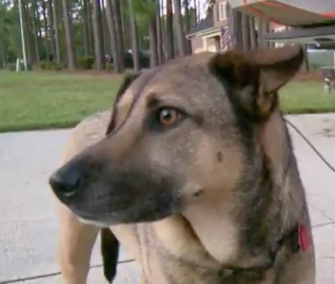 WFMY
Lana and her owner, Marine veteran Chris Williams, were rescued by boat from their flooded North Carolina home.

He may have been in Texas, but by using Twitter, Craig Williams was able to get help for his brother, Chris, who was trapped in his flooded North Carolina home with his dog, who can’t swim. Williams had been contacting authorities for his brother, a former Marine, but emergency response teams were overwhelmed. That’s when he saw a photo of a neighborhood underwater from Hurricane Matthew — and it turned out his brother’s home was in the photo. Williams contacted the Twitter user who’d taken the photo with his drone, and the photographer immediately went back to the scene and flagged down a FEMA crew. The crew used a boat to save Chris and his dog, Lana, on Sunday. “That’s crazy, I didn’t think there were people like that any more,” Chris said of the photographer who dropped everything to help him. Waters are continuing to rise in North Carolina, where there have been thousands of people rescued from their homes by boat, reported Reuters. — Watch it at North Carolina’s WFMY

A crowd gathered on a beach near Cape Town in South Africa to watch as about a dozen rehabilitated African penguins were released back into the sea on African Penguins Awareness Day. Some of the birds poked their heads out of their boxes in anticipation as they arrived at the Simon’s Town beach. Rescuers released the penguins back into the water while hundreds looked on. — Watch it at Science Daily

Endangered Rhinos Give Birth in U.K.

There’s promising news for two critically endangered rhinos who were bred in the U.K. and released into the wild in Tanzania in 2012. The two female Eastern black rhinos, Grumeti and Zawadi, mated in the wild and have given birth to healthy calves. Grumeti’s baby is being called Mobo and Zawadi’s hasn’t yet been named. The births are a “remarkable and vital breakthrough” in efforts to protect one of the most threatened rhino sub-species, said Damian Aspinall, chairman of the Aspinall Foundation. Only about 700 of the rhinos remain in the wild. — Read it at Yahoo 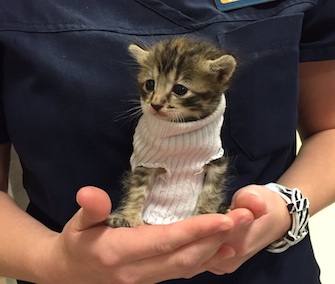 Twitter / crysomemore
A cute kitten sporting a tube sock sweater was adopted after being rescued from the aftermath of Hurricane Matthew.

Kitten Gets a Tube Sock Sweater

We have the story of another animal rescued from the flooding in North Carolina to share — and he’s adorable. Hearts across the Internet melted over the weekend at the sight of a tiny kitten who was rescued after Hurricane Matthew and brought to Banfield Pet Hospital at Petsmart in Raleigh. The photos showed the kitten was being kept warm with a tiny sweater made from a tube sock. An employee at the store saw a family looking at the adoptable cats in the store, and brought the kitten out to see if they were interested in giving him a home. Needless to say, they fell in love and quickly adopted him. — See photos at the U.K.’s Telegraph

A woman walking her own dog last month came across a 6-month-old miniature Dachshund abandoned in the bushes by a dumpster, in terrible condition. “He was absolutely traumatized,” said Katie Nelson, the Mountain View, California, police department's public information officer. The officers who rescued him brought him back to the station to clean him up before bringing him to animal control — and that’s where he met his new owner. Public safety dispatcher Judy Cahill had recently said goodbye to her 14-year-old dog, and immediately fell in love with little Zeus. Just one look and “that was it,” Nelson said of Cahill and her new pup. — Read it at California’s KTVU