April 17, 2015: We've scoured the Web to find the best and most compelling animal stories, videos and photos. And it's all right here. 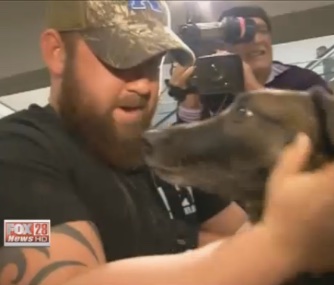 Marine Corporal Seth Hill waited anxiously Wednesday at Port Columbus International Airport in Ohio to see his four-legged partner, Bbazy. Hill and his bombing-sniffing dog, had served together for three years — including 7 months in Afghanistan, where Bbazy protected Hill and his fellow Marines from explosives. Then, she injured her hip, and the two were separated. Now, Bbazy is ready to retire, and Mission K9 Rescue has helped reunite her with Hill. “I’m sure she missed me. I hope she hasn’t forgotten me. It’s rough,” Hill said before the reunion. But his fears were short-lived — Bbazy wagged her tail and kissed her former handler when he let her out of her crate. “I haven’t seen you in forever … you ready to go home?” Bbazy will live out her retirement years at Hill’s home in Kentucky. — Watch it at My Fox 28 Columbus

If you feel the love when your dog gazes into your eyes, you’re not alone. Japanese researchers found that when they give their owners those “puppy eyes,” it triggers an increase in the level of the love hormone oxytocin in both the dogs and their humans. After pairs of dogs and owners spent 30 minutes alone together, an analysis showed that those owners whose dogs looked at them longer in the first five minutes had bigger boosts of oxytocin. Dogs who gazed longer also got a hormone boost. The study, which was published in the journal Science, suggests dogs started gazing at their owners as a social strategy when they were domesticated. — Read it from the AP via ABC News

The African Bouvier's red colobus monkey hadn’t been seen in the wild since the 1970s, and scientists believed it was extinct. But it was spotted in the Congo in March by researchers who took the first ever pictures of the animal. The monkey’s population had been decimated by hunting and logging in its habitat. "Our photos are the world's first [of the monkey], and confirm that the species is not extinct," explorer Lieven Devreese of Belgium said in a statement. — Read it at Live Science 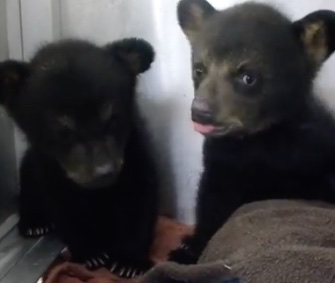 Earlier this month, a pair of orphaned black bear cubs was found alongside the Blue Ridge Parkway in North Carolina. The cubs, who weighed just four pounds each, were taken in by the Appalachian Bear Rescue in Tennessee. Bonnie Blue and Ridgeway, who are 2 months old, are now thriving. "They are gaining strength and weight every day," said the group’s president Dana Dodd. "It won't be long before they leave our cub nursery for an outdoor habitat." Right now, the brother and sister bears love their formula — and each other. The rescue plans to return the cubs to the wild when they’re strong enough. — See photos at Today

Two critically endangered western lowland gorilla babies got a chance to explore their outdoor enclosure with their moms at the Wildlife Conservation Society’s Bronx Zoo this week. The babies were born within 48 hours of each other to 16-year-old moms Layla and Kumi in January. Ernie, who’s 32, is dad to both of the babies. The zoo hasn’t determined the babies’ genders, so they haven’t been named yet. — Watch it at Discovery News and see more cute zoo baby photos