July 11, 2013: We've scoured the Web to find the best and most compelling animal stories, videos and photos. And it's all right here. 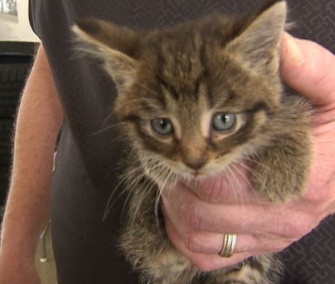 My Fox Detroit
It took mechanics two hours to free this kitten from a car's dashboard.

On a hot day in Southfield, Mich., John Norwood was stopped at a traffic light when he noticed a tiny gray kitten in the middle of the road. Knowing the kitten was in danger, Norwood decided to pick it up and bring it to a shelter. But once inside the car, the weeks-old kitten crawled up under the dashboard and disappeared. Norwood brought the car to his Chrysler dealership, where it took a team of mechanics two hours to dismantle the dash on Wednesday and use a can of cat food to try and lure the kitty out. “Boy, you made us work for that one, huh?” laughed one of the mechanics as he held the little kitten. Before the kitten was even out of his hiding spot, Joe Downey, who was looking on, said he’d adopt him. “Good story. Little fella’s got a home and there’s a very happy ending,” said Norwood. — Watch it at My Fox Detroit

A new study confirms a long-held theory that animals can influence the gender of their offspring in response to environmental conditions. The research was based on 90 years of records from 40,000 mammals at the San Diego Zoo. The animals would skew the male-female ratio of their offspring to optimize their chances of passing on their genes. The animals don’t make this decision consciously, but in response to environmental cues. Still, exactly how mammals manage this manipulation remains a mystery. The study was published in the journal PLOS ONE. — Read it at Live Science

Long criticized for their heavy use of water and pesticides, a growing number of studies show that golf courses are providing a good wildlife habitat in urbanized areas. Two recent surveys of ponds in the Charlotte, N.C., metro area found that golf ponds "are providing something that other ponds are not," says University of Kentucky herpetologist Steven Price. He co-authored two new papers on the surveys’ findings. In one paper published in the Journal of Herpetology, scientists say that the painted turtle and the slider were just as abundant in golf course ponds as in farm ponds. The second paper, published in the journal Landscape and Urban Planning, found that golf courses in the study had more variety of turtle species than farm and neighborhood ponds. — Read it at National Geographic 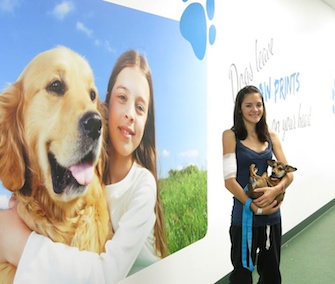 Despite strict legal and medical restrictions, Healing Paws at Wolfson Children’s Hospital in Florida is one of a growing number of dog visitation programs around the country. This program, launched in May, allows long-term pediatric patients to reunite with their family pets in a designated area near the hospital’s entrance. While therapy dogs create a memorable event with their visit and can distract young patients from their troubles, a visit from a familiar pet has a calming and reassuring effect, according to Emily Patterson, an animal welfare scientist of the American Veterinary Medical Association. “When your dear pet visits, it's like a friend is visiting you. It reconnects you with your community,” she said. She called for more research on human-animal interactions that would put “sound policies and procedures in place” at hospitals. — Read it at USA Today

Cat Café to Open in Paris

In a city known for inspiring great writers and philosophers at its quaint cafés, a new Parisian business is taking a cue from Tokyo, London and Vienna: it will be filled with felines. “[Most] French people like cats but they don’t all have the possibility to have them,” said entrepreneur Margaux Gandelon. “This café targets those French people …” Patrons will have the chance to sip their espresso and pet one of the many cats that will roam the premises. — Read it at Today