December 28, 2016: We've scoured the Web to find the best and most compelling animal stories, videos and photos. And it's all right here. 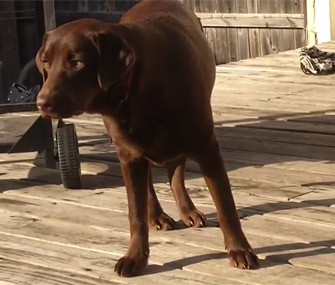 NBC 10 News
A dog named Kacy disappeared after a car accident on December 15 and was found on Christmas Eve.

When the Ryan family’s dog disappeared after a hit-and-run on December 15, they feared they might not see their beloved Kacy again. But on Christmas Eve, Thomas Ryan was celebrating the holiday at his niece’s house when he received some good news. “I got a phone call from the Warwick Police Department. They asked me if I believe in Christmas miracles and I said, ‘Yes, I do,’” Thomas recalled to NBC 10. “They said, ‘A lady on Jefferson Street has your dog.’” The family drove right over to be reunited with Kacy. “I opened the door and Kacy was so excited to see me,” Linda Ryan said. “She was wagging her tail and kissing me.” — Read it at People Pets

Trying Not to Hit a Reindeer? There's an App for That

With 300,000 reindeer roaming the wilds of Finland, it’s no surprise that nearly 4,000 are killed every year in traffic accidents. But a new app is hoping to change that. Called “Porokello,” or “Reindeer Bell,” the app allows drivers to register any reindeer spotted near roads with the touch of a button. Using GPS technology, it creates a one mile warning zone that lasts for an hour and warns other app users approaching the area.“If there are reindeer, (drivers) reduce speed,” Ylinampa said. “When they have passed the warning place, then they can get back to the normal speed again.” And it seems to be working — there were 300 fewer reindeer accidents in November than compared to the same month in 2015. — Read it at Yahoo Sports 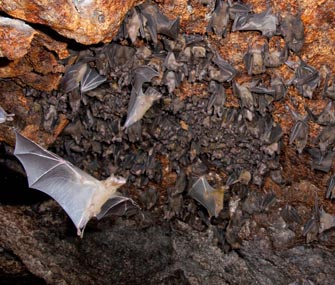 Thinkstock
Researchers have a better understanding of bat calls after recording more than 15,000 calls.

Researchers are starting to understand what bats are saying, thanks to a study from Tel Aviv University that monitored the animals audibly and visually for more than two months. After recording more than 15,000 calls, the team found that there was a significance to their screeching. Different calls were used for different situations, many of which were aggression-filled encounters, the team observed. "We have found that bats fight over sleeping positions, over mating, over food or just for the sake of fighting," said study lead Yossi Yovel. The study was published in the journal Scientific Reports. — Read it at Seeker

A man in Queensland Australia could face a hefty fine for keeping pet rabbits, which are illegal under the city’s biosecurity laws. The Brisbane City Council has received 11 complaints of domestic rabbit sightings and traced them back to the same property. “Council understands the source of the rabbits is a local resident, who is keeping the animals on his property,” they said in a statement. “Council is working with the resident to have the rabbits removed.” Queensland has been facing mounting pressure to change the law, which some residents deem “ridiculous.” — Read it at The Guardian


Cat With Bullet in Spine Thrives

When animal control officers in Naples, Florida, first found Roger, they didn’t think would make it. The cat had been shot; the bullet was lodged in his spine and he was unable to move at all. But a veterinarian had an idea. Injecting Roger with a steady dose of steroid shots brought about amazing changes. The cat not only survived, but improved by leaps and bounds — literally. Though Roger still has trouble controlling his bladder, and the bullet (under the advice of top surgeons) remains in his spine, an anonymous donor has pledged to pay his medical expenses the rest of his life. Now all Roger needs is a forever home. — Read it at The Dodo