August 6, 2013: We've scoured the Web to find the best and most compelling animal stories, videos and photos. And it's all right here. 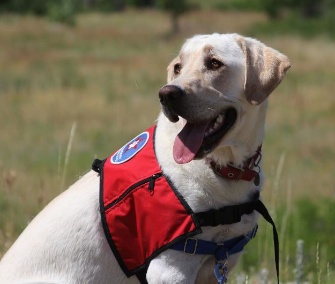 Camp Bow Wow
Cashew is one of the two therapy dogs being gifted to Newtown, Conn., by Camp Bow Wow.

Two new therapy dogs are heading to Newtown, Conn., in time for the start of the new school year. Cashew, a Labrador Retriever, and Nutmeg, a Whippet mix, are a gift to the town as its residents continue to heal after the December shooting that left 26 students and staff members dead at Sandy Hook Elementary School. The dogs are being donated by Camp Bow Wow, a national pet care franchise, as the company launches its new Scouts Angels philanthropic initiative. The pair will be introduced to the community next week, and will be joined by other therapy dogs in the program and their partner therapists for several community events hosted by the group. Dogs have proved to be a big help in the wake of many tragedies, and several canines have been on hand to help in Newtown.

A lucky gray and white kitten who was stuck in a car’s fan belt in northern England unintentionally activated a warning light on a car’s engine, alerting the driver that something was wrong. The driver looked under the hood but didn’t see anything. Then Brian Marsh, a patrolman from AA (which is similar to AAA in the U.S.), removed the engine cover and “saw this little face staring back.” Marsh had to do some dismantling before managing to free the kitten, who Marsh thought was likely looking for shelter from the pouring rain when he climbed into the engine bay. Named Pippin, the kitten was picked up by the RSPCA Felledge Animal Centre. His ear was injured in the incident, but he’s now recovering well and has a home to go to once he’s healed. — Read it at the U.K.’s The Northern Echo

Thousands of people have signed an online petition calling on officials in Sao Paulo to return a tufted capuchin monkey to his owner, 71-year-old Elizete Carmona. Two police officers removed the endangered animal, named Chico, from Carmona’s arms. Chico has lived with Carmona since 1976 — 22 years before a law was passed to ban the acquisition and possession of wild animals. "For me, I've lost a son. They've taken my son away," Carmona said. But the animal protection center where the monkey is being kept says the animal is actually a female, and suffered from lesions from a collar that her owner kept on her and had atrophied feet. She will be kept in an enclosure with other monkeys because she’s too old to be reintroduced to the wild. — Read it from the AP via Yahoo 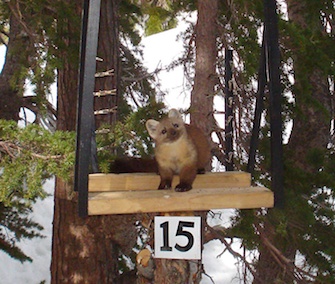 Oregon Department of Fish and Wildlife
An adorable marten takes its own photo with a motion-sensitive camera.

In Oregon’s Central Cascades, 32 road kill-baited, motion-sensitive cameras captured nearly 26,000 photos over the course of six months, providing biologists with a clearer idea of the diversity of carnivores in the forest. Among the most photographed was the American marten, a member of the weasel family who’s a good indicator of the forest’s health and diversity. But the camera also captured images of the rarely seen montane red fox, and a raccoon that surprised biologists Tim Hiller and Jamie McFadden-Hiller, who planted the cameras. “We’re not sure why it was up there or how it was surviving in the deep snow and harsh winter conditions,” said Hiller. “As far as I know, this is the highest-elevation raccoon ever documented, at least for a native population during winter.” That photo will be published in a scientific journal later this year. The project is backed by the Oregon Zoo Foundation in partnership with several other organizations.

If it wasn’t for the iconic bald eagle, a new survey finds that most respondents would want the bison to be the national animal. The YouGov poll results, released on Sunday, showed that 22 percent of respondents favored the bison. The buffalo was followed by mountain lions with 16 percent of the vote, bears at 12 percent, doves with 11 percent, turkeys with 9 percent and rattlesnakes at 3 percent. — Read it at the Washington Times