Nov. 7, 2012: We've scoured the Web to find the best and most compelling animal stories, videos and photos. And it's all right here. 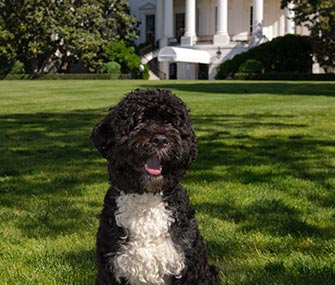 At this time four years ago, President Barack Obama was vowing to fulfill a campaign promise to his daughters: he won the presidency, so he would get them the puppy they wanted. Now, the first family’s 4-year-old Portuguese Water Dog, Bo, gets to spend another four years romping around the White House. But Obama wants to be clear about one thing — a second term doesn’t mean a second dog. “I am so proud of you guys,” he told Sasha and Malia during his victory speech in Chicago, before joking, “But I will say that for now, one dog’s probably enough.” — Read it at Today

Plus: Did your pet vote? On Election Day, many dog owners were seemingly accomplices in voter fraud … or at least putting their “I voted” stickers on their pups and tagging them #voterfraud on Instagram. — See photos at the Huffington Post

The increase of bobcats in urban areas has also increased their susceptibility to human diseases— and vice versa.By analyzing bobcat fecal samples in rural parts of Colorado and comparing them to densely populated regions near Denver, Boulder and Los Angeles, researchers found that bobcats in urban areas were more likely to carry parasites including Toxoplasma gondiiand two others that can cause stomach upset and diarrhea. "The growing interaction of humans and wildlife means that we now share our diseases with each other at an ever-increasing rate," said Sam Scheiner, of the National Science Foundation's Evolution of Infectious Diseases program. Researchers believe the bobcats were first exposed to the parasites from human water supplies around cities. The study was published in the Journal of Clinical Microbiology. — Read it at Live Science via Yahoo 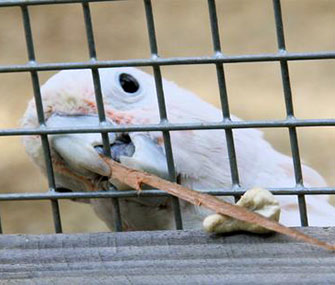 University of Oxford
Figaro the cockatoo uses a stick to try to reach a toy.

This is one smart bird. While cockatoos are not known to use tools in the wild, a captive Goffin’s cockatoo named Figaro, who lives near Vienna, used his beak to break off a piece of a wood beam and use it to reach for food and other objects. Scientists from the Universities of Oxford and Vienna were stunned when they filmed Figaro in action. “Figaro shows us that, even when they are not habitual tool-users, members of a species that are curious, good problem-solvers, and large-brained, can sculpt tools out of a shapeless source material to fulfill a novel need,” said Alex Kacelnik of Oxford University's Department of Zoology and author of the study, which was published in the journal Current Biology. — Read it and watch video from the University of Oxford

There’s good news for this ironically named shelter cat in Texas. Found as a stray two months ago, Skinny tipped the scales at a whopping 41 pounds. With a special diet and exercise — and under the watchful eye of a veterinarian — the orange tabby has dropped to 37 pounds, but is still too overweight to be adopted. Skinny’s caretakers at the East Lake Pet Orphanage say he’ll need to drop to about 30 pounds before he can be considered for adoption. — Read it at AP via Connecticut’s Greenwich Time

The Dancing With the Stars judge and animal lover Carrie Ann Ianaba announced the launch of The Carrie Ann Inaba Animal Project, which aims to support the rescue, welfare and well being of animals. By partnering with the Entertainment Industry Foundation, Inaba, who has four cats and two dogs of her own, hopes to raise $1 million in her foundation’s first year. "I can't fail because this isn't for me, it's for the animals," she said. — Read it at People Pets