Oct. 3, 2014: We've scoured the Web to find the best and most compelling animal stories, videos and photos. And it's all right here. 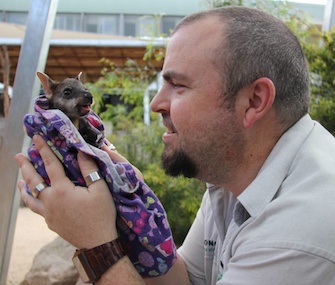 A canvas backpack serves as a makeshift pouch for a 6-month-old swamp wallaby joey whose mom was hit and killed by a car in Sydney, Australia, last month. A Taronga Zoo keeper who was on her way to work saved the joey from her mom’s pouch. Now, baby Alkira is being hand-raised by the zoo’s education coordinator, Matt Dea. Alkira gets five bottle feedings a day, including one at 2 a.m. “Caring for such a young joey is very involved and she hasn’t left my side,” says Dea. “She comes home with me, she comes to the shops and she sleeps beside my desk at work each day.” Dea expects Alkira to start to venture outside her pouch in the next 4 to 6 weeks. “She’ll be a little wobbly on her feet at first, but she’ll soon be hopping in and out as she becomes more adventurous,” he says. — Read it from the Taronga Zoo

A new study of commercial pet foods found that out of 52 products they tested, 20 were potentially mislabeled. Of the 20, 16 of the products contained meat that wasn’t included on the label. In three cases, one or two meat species were substituted for other meat species. And in one case, the food contained a meat species that couldn’t be verified. Pork was the most commonly undeclared meat. It’s unclear how the mislabeling occurred or whether it was intentional. The findings were published in the journal Food Control. — Read it at Science World Report

Researchers have found that human activity is causing cheetahs to expend more energy and may be the cause of their decline. The number of cheetahs in the wild has dropped from about 100,000 a century ago to about 10,000 today. Experts had thought that larger predators were monopolizing their food. But the new study finds that the big cats are using more energy hunting for prey than running at top speeds. “The reality may be that human activities — for example erecting fences that inhibit free travel or over-hunting cheetah prey — are forcing cheetahs to travel ever-increasing distances and that this may be compromising their energy more than any other single factor,” said lead researcher Michael Scantlebury of Queen’s University Belfast. The study was published in the journal Science. — Read it at Science Daily 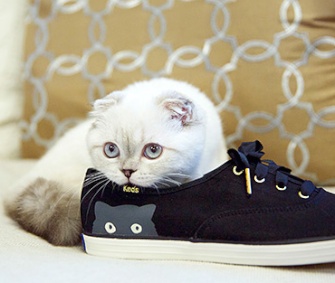 In the world of feline models, Olivia Benson may be giving designer Karl Lagerfeld’s Choupette a run for her money. (Just last month, Choupette appeared in a campaign for her own beauty line.) Swift’s fluffy white kitten is lending her sweet face to a new ad campaign for Keds. The shoe, which features the image of a cat, honors Swift’s new album, 1989, which will be released on Oct. 27. The shoes are $55 on Keds.com. — Read it at Us Magazine

Earlier this week, we told you about Susie, the amazing Pit Bull who won the Hero Dog Award from the American Humane Association. But there’s a human winner to tell you about, too. Sergeant First Class Charles 'Chuck' Shuck of Gabe to the Rescue was given the AHA’s Humane Hero Award for the children's book "Gabe, The Dog Who Sniffs Out Danger." Gabe was a yellow Lab who was rescued from a Texas shelter by the military. He was trained to sniff out explosives and served with Shuck in Iraq. He retired in 2009 and spent his retirement telling kids how important it is to stay in school. He was the AHA’s Hero Dog in 2012 and died in 2013. Gabe to the Rescue helps find homes for shelter dogs. — Read it from the AHA via Facebook