August 7, 2015: We've scoured the Web to find the best and most compelling animal stories, videos and photos. And it's all right here. 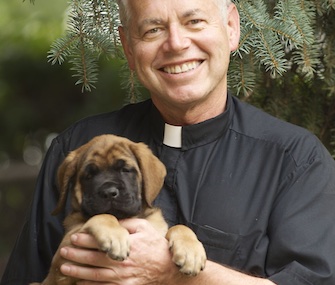 The Montana Standard / AP
Rev. Patrick Beretta was reunited with his Mastiff puppy, Ysolt, after police freed him from the pipe where he was trapped.

Police in Butte, Montana, came to the rescue of Rev. Patrick Beretta’s 8-week-old Mastiff puppy Tuesday. The pup, named Ysolt, had just arrived Monday from his former home in Georgia, but Beretta couldn’t find him in the fenced-in yard by the church after morning Mass. Fearing Ysolt had been stolen, he called the police for help. The officers started to look for a suspect but thought the puppy might be close by. When Officer Patrick Fleming shined a flashlight inside the opening of a 12-inch wide pipe outside the church, he spotted the scared puppy trapped inside. With the help of an animal control officer, the police officers gently nudged the puppy to the other end of the 30-foot long pipe, which runs under part of the church. Finally, Fleming was able to pull Ysolt out and reunite him with the grateful priest. “Everything was all wrapped up and [Beretta] got his puppy back, so that’s a great feeling,” said Fleming. — Read it at The Montana Standard

A new frog species discovered in the Peruvian Andes would be easy to miss. The frog is only the size of a jelly bean. It has white marks on its belly and what looks like a dark brown face mask. Researchers said the frogs live in the leaf litter on the floor of the humid cloud forest, and they’re active during the day. It was first found by a biologist in January 2011, but has now been officially described in the journal ZooKeys. The scientists said the frog species likely has a very limited range, making it vulnerable to the effects of deforestation and habitat loss, and is also at risk of a deadly fungus. — Read it at Live Science

Zulu broke free from his Miramar, Florida, home this week, but was so slow moving that he didn’t get very far. Neighbors called local police when they saw the giant, 80-pound tortoise lumbering down the street. Police posted photos of the tortoise on social media in an effort to find his owners, and it worked. Four hours later, Zulu’s owner came to get him. This wasn’t the first time the curious animal left home. “When he gets his mind going and he wants to leave, he just goes,” said owner Mary Schul. She plans to get him a tag so she can find him quickly if he wanders off again. — Watch it from the AP via Science Daily 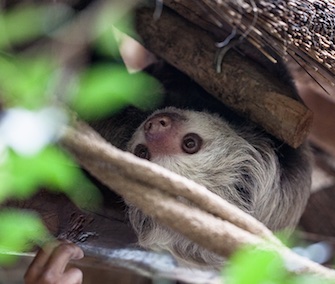 A two-toed sloth was born to mom Hershey and dad Carlos at Chicago’s Lincoln Park Zoo on July 25. Mom is holding her baby close and “being very attentive,” said curator Diane Mulkerin. Because the infant clings so closely to its mom all the time, it will likely be several months before keepers can determine its gender and give it an exam. The zoo will wait until after that to come up with a name for the baby. — Read it at the Chicago Tribune

Dog to Return Home After 9 Years

A Boxer mix who was only a year old when he disappeared from his Tennessee home will be reunited with his family Saturday. Now 10 years old, the dog’s latest owner brought him to the Foothills Animal Shelter in Golden, Colorado, saying he was heartbroken but could no longer care for him. The shelter staff scanned the dog for a microchip and the owner information led them to a man named Lloyd who was listed as living in Tennessee. He and his family now live in Alabama, and are making the 16-hour drive to Colorado to be reunited with Boozer. They hope to arrive at the shelter Saturday morning. — Read it at Colorado’s 9News