Dec. 23, 2013: We've scoured the Web to find the best and most compelling animal stories, videos and photos. And it's all right here. 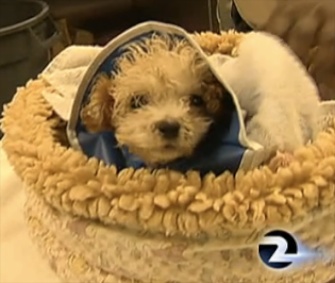 KTVU
Gem was found inside a bag at a San Francisco recycling plant.

Recycling center workers in San Francisco found a diamond in the “ruff” on Friday: a 10-month-old puppy wiggling inside a bag of trash. "We could tell the puppy was still moving and it was trying to crawl out of the bag itself," said Recology material handler Gregory Foster. "Luckily we stopped the line in time before it actually fell off the belt into the pit." The Poodle mix was suffering from what appeared to be animal bites around her neck, and San Francisco Animal Care and Control is investigating how she wound up in the trash. The puppy, who’s been named Gem, is expected to make a full recovery. "She's a precious little gem that ended up in a trash can," said animal control officer Capt. Lee Ellis Brown. Gem will be up for adoption if no one comes forward to claim her. — Watch it at San Francisco’s KTVU

New research finds that American Pikas living in lower elevations eat nutrient-poor mosses, which suggests they might be able to adapt their diet to a warming planet. The tiny rabbit-like animals are known for their ability to thrive in frigid areas. They conserve so much heat that it couldn’t spend more than two days at temperatures over 78 degrees. Yet, some were living in the Columbia River Gorge in Oregon, where there’s much less snow than there is in their native habitat on Mount Hood. So, researchers set out to find out what they were eating, and discovered it was moss. "Mammals typically can't eat large amounts of moss because it's a low-quality food. It's about 80 percent fiber, so it's kind of the consistency of eating paper," said University of Utah Ph.D. student Johanna Varner. Varner says her work indicates that pikas are more flexible in their behaviors than previously thought. The study appears in the Journal of Mammalogy. — Read it at National Geographic

Record Number of Manatee Deaths in 2013

About 16 percent of Florida’s endangered manatee population died this year, according to the Florida Fish and Wildlife Research Institute. The number of deaths topped 800 for the first time since record keeping began in the 1970s. Experts say about 173 of the animals were females of breeding age. A massive bloom of red tide algae in Southwest Florida and a mysterious illness affecting manatees in the Indian River Lagoon are being blamed for the deaths of the animals. — Read it from AP via the Huffington Post 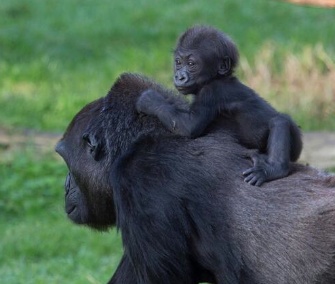 Meet Kabibe, whose name means "little lady" in Swahili. The critically endangered 5-month-old western lowland gorilla was on public view at the San Francisco Zoo for the first time on Saturday. The baby girl was born in July to first-time mom Nneka and dad Oscar Jonesy. Over the last month, the infant’s care has been slowly transitioned from the zoo’s staff to her gorilla family. It’s not unusual for Bawang, the troop’s 33-year-old matriarch and the baby’s grandmother, to take on the role of mom at the zoo, and she quickly stepped up to do that with little Kabibe. “Once again, Bawang has taken on the huge responsibility of motherhood and has set a positive tone for the troop,” said San Francisco Zoo president Tanya Peterson. — Read it at the San Francisco Zoo

Some small rescue groups are turning to a new tactic to draw attention to dogs who are in need of homes — naming them after celebrities. They say that the names can give potential adopters a clue as to what the dog’s personality is like, and help them make a connection to the dog, even if it’s over the computer. “The name made me think how cool: I would love a dog named Willie Nelson,” said Robert Raymond, a reality show producer in New York, who adopted the cattle dog and Basset Hound mix after running across him in his Facebook feed. Other examples include a Dachshund mix named Dakota Fanning, a Golden Retriever named Diane Sawyer and a terrier named Gary Busey. — Read it at The New York Times