Feb. 17, 2017: We've scoured the Web to find the best and most compelling animal stories, videos and photos. And it's all right here. 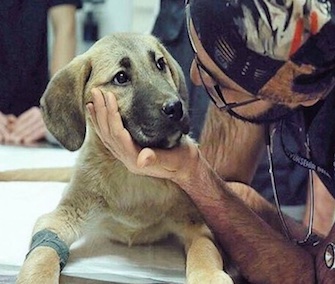 A 3-month-old puppy was saved this week after spending 10 days trapped in a 230-foot borehole in Turkey. People could hear Kuyu’s cries for help but local emergency workers and animal groups couldn’t reach him. They lowered food down to him while they turned to the disaster and emergency management authority for help. The group, which usually helps in earthquakes, used thermal imaging to find the puppy, and then worked for days to free him, even getting assistance from a coal rescue crew sent by the Turkish energy minister. Kuyu was finally pulled safely from the well on Wednesday morning, where he was met by a cheering crowd. And there’s more good news for Kuyu: he’s now been adopted by an Istanbul fire station that helped with his rescue. — See photos at Buzzfeed

Study: Drones Work as Well as People at Counting Birds

Researchers from Gettysburg College compared drones with audio recorders hovering to “listen” for songbirds with human observers on the ground, and found the two methods compared favorably. The team didn’t observe a problem with drones themselves affecting bird behavior, but urged more study on that matter. They said using drones would allow counts to be made in dangerous and inaccessible locations where ground-based surveyors are hindered. The study was published in the journal The Auk: Ornithological Advances. — Read it at Seeker

Baleen whales, like the blue whale, take huge gulps of water to filter for food, stretching a pouch of skin under their chins to accommodate the load. But a new study finds this huge stretch doesn’t hurt the animals because whales have nerves that are specially adapted to prevent them from feeling pain. Researchers found the whales have nerves that are coiled like a telephone cord so they can still work when stretched. As the whale empties its pouch, the nerves relax and begin to coil. The study was published in the journal Current Biology. — Read it at Live Science 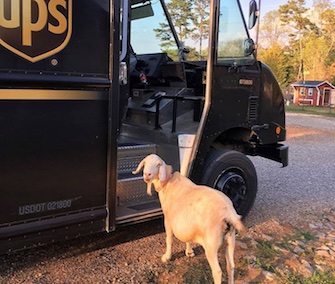 The Gentle Barn Tennessee / Facebook
Pearl, an 18-year-old rescued goat, is "in love with" the UPS man who visits her sanctuary.

Pearl, a goat who lives at a sanctuary for abused animals in Tennessee, found her favorite human in a UPS driver. “When she hears his truck pull in she will drop whatever she is doing to run and see him,” The Gentle Barn sanctuary said in a Facebook post last weekend. “She will wait right outside his truck for him and sometimes even get impatient and climb in.” And the feeling is mutual. “He always brings peanut butter treats for her and gives her lots of love while he is here … he has told us that no matter what kind of day he is having, when he sees Pearl run to greet him everything is better. Sometimes we find love in the most unexpected places!” — Read it at UPI

Washington’s National Zoo plans to spoil its 3-year-old giant panda, Bao Bao, with treats and mementos this weekend before she departs for her new home in China on Tuesday. Bao Bao was the first surviving cub born at the zoo since 2005. As part of the zoo’s agreement with China, cubs born in the U.S. are required to be sent to China before they turn 4 years old. Bao Bao’s handlers plan to give her special treats including dumplings and a heart-shaped ice cake, and items to remind her of her birthplace. She will travel to China via FedEx. — Read it from Reuters via Yahoo