June 5, 2015: We've scoured the Web to find the best and most compelling animal stories, videos and photos. And it's all right here. 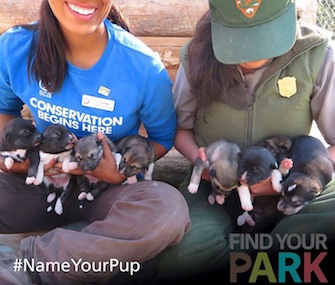 The newest litter of Husky sled dogs at Denali National Park in Alaska was named this week with help from the public. Sled dogs are part of the park’s tradition. They’re raised at a kennel there to help protect the park. In the winter, the dogs help park rangers patrol the wilderness, where motorized vehicles like snowmobiles aren’t allowed. This year, officials at Denali asked the people to use one word to answer the question, “What does your park mean to you?” From the many suggestions they got, the eight puppies were introduced Wednesday as Wilder, Venture, Solace, Disco (for discovery), Summit, S’more (a nod to camping in the park), Vista and Honor. — See photos on Denali’s Facebook Page

A team of researchers found seven new frog species in the isolated, mountainous areas of the southern Brazilian Atlantic Rainforest in their five years of work there. None of the brightly colored frogs is bigger than an adult’s thumbnail. The frogs are extremely vulnerable to extinction because of their very limited habitat, researchers said. Unlike most frogs, who have five toes and four fingers, these frogs have three toes and two fingers. The frogs’ genus was discovered in the 1800s, but because of their remote habitat, the seven species hadn’t previously been identified. The species are described in the journal PeerJ. — See photos at Discovery News

A new study finds that cats might have gotten a reputation for being picky eaters because they taste bitter flavors differently than humans. Cats are naturally carnivores, and in the wild, a bitter taste might indicate the meat they’re eating is rancid. Domestic cats might find medicines or plant extracts that are mixed into their food to be bitter. Researchers from pet food flavor companies used cell cultures to test the cellular response of two taste receptors. Their findings suggest that cat taste diverges from human taste more than previously thought. They found that the receptors in cats barely responded to things that humans find bitter. The researchers are hoping to use their findings to create foods and medicines that cats like better. The study was published in the journal BMC Neuroscience. — Read it at Popular Science 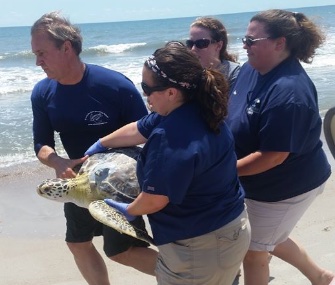 Florida Fish and Wildlife
Once deemed non-releasable, Sunburst the green sea turtle made a surprise comeback.


After making a very rare comeback, Sunburst, a sub-adult green sea turtle, was returned to the Atlantic Ocean off the coast of Florida. Sunburst was rescued in Florida five years ago, suffering from flipper injuries and unable to move and dive. The turtle was rehabilitated at the Georgia Sea Turtle Center and settled into captivity at the Pittsburgh Zoo and PPG Aquarium three years ago after she was deemed “non-releasable.” But the team there did such a good job taking care of Sunburst that the veterinarians who treated her at the Georgia rehab and the U.S. Fish and Wildlife Service agreed she was ready to head back to the ocean after all. Sunburst made the long road-trip home to Florida Tuesday and Wednesday, and was set free Thursday. While the zoo refers to Sunburst as a “she,” Florida Fish and Wildlife notes that Sunburst’s gender is still a mystery. — Read it at Florida Fish and Wildlife’s Facebook Page and see more photos on Flickr


Now You Can Stay in a Beagle-Shaped Inn

The one-unit Dog Bark Inn B&B is listed on the real estate rental site Airbnb. Located in rural Idaho, the pup-shaped inn says it offers views of prairie grain fields. Its owners are artists Dennis and Frances, who carve dog sculptures using chainsaws. Rates start at $98 a night, plus $15 for each pooch you have staying with you in this doghouse. — See photos at Today