Jan. 31, 2014: We've scoured the Web to find the best and most compelling animal stories, videos and photos. And it's all right here. 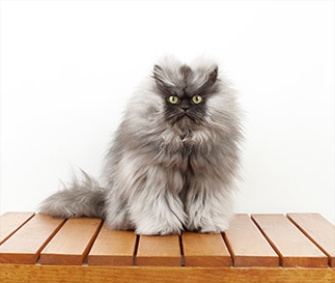 Guinness World Records
Colonel Meow's 9-inch fur put him in the 2014 edition of the Guinness Book of World Records.

The Himalayan-Persian mix cat who had thousands of Internet fans and held a world record for his long fur died on Wednesday. “Colonel Meow passed away yesterday evening. I will post more about the details when I've had a few days to grieve,” read a post on his Facebook page Thursday. “Thank you so much for your understanding, Minions.” The 2-year-old cat had won the hearts of thousands with his online persona as a dictator — and referred to his fans as Minions. Owned by Ann Avery and Eric Rosario, he was hospitalized last year, just two months after he appeared in the Guinness Book of World Records with the title Longest Fur on a Cat. Condolences poured in on the cat’s Facebook page. “May he dominate the afterlife and submit all there to his will,” wrote one Minion. — Get updates on Colonel Meow’s Facebook Page

Snowy Owl Hit by a Bus in D.C.

Washingtonians had become enamored with the Arctic visitor, who was spotted perched around the city in recent days. But early Thursday, the snowy owl was struck by a bus in the city. Police transported her to the National Zoo. Veterinarians there said she was “alert and responsive but subdued.” Although there were no obvious injuries, the team found blood in her mouth, which they said is a symptom of head trauma. They planned to X-ray her to look for internal injuries as well. Veterinarians believe the owl is a female because it’s slightly larger and darker than male snowy owls. The owl was later taken to City Wildlife, a D.C. rescue and rehabilitation facility, where she was resting comfortably. Their goal is to release her back into the wild as soon as possible. Native to the Arctic, snowy owls have been making rare appearances as far south as Bermuda and Florida this year. — Read it at the Washington Post

Another seemingly out-of-place animal has been making headlines in Hawaii. Nearly 100 years ago, a wallaby couple escaped from a private zoo and took off on the island of Oahu. They were never captured, and the Australian natives started a family in the dense vegetation. There have only been a few sightings of the brush-tailed rock wallabies in the area over the last century, but a local man who was enchanted by their story recently spotted one of the little marsupials sitting on a fallen branch. Residents were being reminded to keep their distance since the wallabies are such a small and delicate population, and hunting them is illegal. — Read it at the Huffington Post 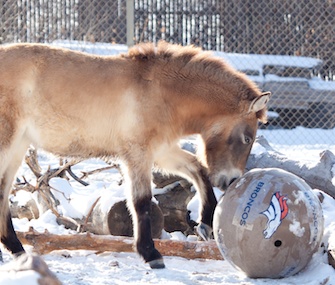 Denver Zoo
A horse at the Denver Zoo plays with a Broncos ball.

The Denver Zoo and Seattle’s Woodland Park Zoo are getting behind their hometown teams with a friendly wager. If the Denver Broncos win the Super Bowl on Sunday, a curator from the Woodland Park Zoo promises to hand deliver a case of Washington apples to the Denver Zoo’s Przewalski’s horses — and spend the day working with them while sporting a Broncos jersey. And if the Seattle Seahawks prevail, Denver Zoo curator of birds John Azua will take a case of trout to Woodland Park Zoo for its sea eagles and spend a day working there in a Seahawks shirt. “Game on! Really, this bet is a win either way for us … the exchange would also give us a chance to talk shop and compare best practices,” says Azua.

Plus: Meanwhile, animal prognosticators are making their predictions for the big game. Earlier this week, we told you about Teddy Bear the talking porcupine calling it for the Seattle Seahawks. But now Buffett the manatee, who’s picked the winner for the last six years, is weighing in. Buffett, who lives at Mote Marine Laboratory & Aquarium in Sarasota, Fla., picked the Denver Broncos. We’ll see who’s the best animal clairvoyant on Sunday!— Read it from the Bleacher Report

While an unusual winter storm may have caused chaos for humans in the southern city this week, some residents of Zoo Atlanta were quite pleased with the chance to play in two inches of snow. It was an especially big hit for the zoo’s twin panda cubs, Mei Lun and Mei Huan. The keepers brought some of the white stuff inside in a half-barrel for the girls play with, along with their mom, Lun Lun. — See photos on Facebook