July 24, 2013: We've scoured the Web to find the best and most compelling animal stories, videos and photos. And it's all right here. 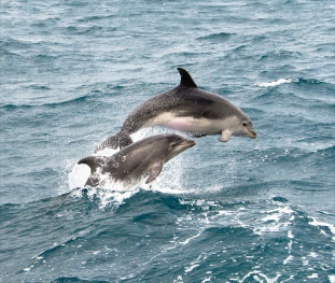 Dolphins Call Each Other by Name

New research from the University of St. Andrews in Scotland finds that bottlenose dolphins respond selectively to their signature whistles, like a person might respond to their name being called. When combined with previous research about dolphin whistles, the study presents “the first case of naming in mammals, providing a clear parallel between dolphin and human communication,” said Stephanie King, one of the authors of the study. During their experiments, dolphins ignored signature whistles that belonged to other dolphins or were unfamiliar, but usually whistled back when they heard their own. The study was published in the journal Proceedings of the National Academy of Sciences. — Read it at Wired Science

The decline of sea ice in the North Atlantic is at least in part responsible for the increase in the number of harp seal strandings along the U.S. East Coast, finds a new study. The fluffy white seals mate and give birth on sea ice off the east coast of Canada in the spring. But many have ended up as far away as the Carolinas. Scientists think that with less sea ice, the surface becomes crowded, forcing pups into the water before they’ve learned how to navigate or how, or where, to fish. This might lead to them following groups of fish south, or becoming disoriented. Researchers also found that a disproportionate number of the stranded seals were young males, who tend to wander further away once they’re on their own. The study was published in the journal PLOS ONE. — Read it at Live Science

For the last two weeks, a Rufous-necked wood-rail, a species that usually lives in the tropical forests of Central and South America, has been making itself at home in the Bosque del Apache National Wildlife Refuge in New Mexico. The arrival has caused a frenzy in the birding world, with bird watchers flying in from all over the country and making long road trips for a glimpse of a bird they never expected to spot in the U.S. "To see a big, colorful rail and to see it walking around out in the open is just really special,” said Jeffrey Gordon, president of the American Birding Association. “Then, you can add the dimension that it is not only far, but hundreds if not thousands of miles from where you would typically see it." — Read it from the AP via the Huffington Post 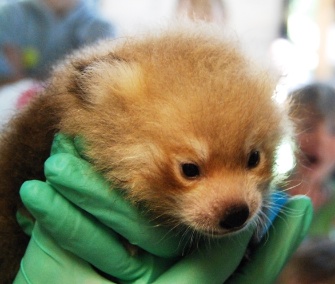 Snuggled in his cozy home with blankets and a fox stuffed animal who stands in for mom, a 5-week-old red panda cub is “progressing well” at the Sacramento Zoo. Animal care staff at the zoo decided to hand rear the baby boy because he wasn’t gaining enough weight after the first 2 ½ weeks, and his mom wasn’t providing consistent care, according to the zoo’s blog. The cub is now up to 1 pound, and officials are encouraged that he has steadily gained strength and mobility. — Read it from The Official Sacramento Zoo Blog

As part of a gift for the Prince of Cambridge from the Australian government, the Taronga Zoo will name its bilby enclosure for the baby boy — once he has a name. The nation will send Prince William and Kate a package with some bilby toys as part of the gift. (Bilbies are desert-dwelling marsupials.) “Taronga Zoo is incredibly proud to be part of the Australian Government's gift to the Royal baby, supporting Bilby conservation,” the zoo said on its Facebook page. — Read it at People Pets