July 21, 2014: We've scoured the Web to find the best and most compelling animal stories, videos and photos. And it's all right here. 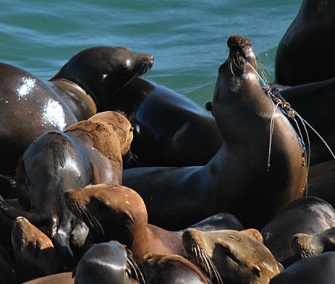 The Marine Mammal Center
Snouty will soon get a second chance at life in the ocean.

Snouty Gets a Second Chance

Over the course of three months starting in March, more than 20 people called the Marine Mammal Center in California to report seeing a juvenile sea lion with a severe entanglement around his mouth. Snouty, as he was named, evaded capture until June 26, when a rescue team finally managed to sedate him and pull him on board their boat. The animal had a small trap used in the fishing industry to hold crabs for bait hanging from his face, and monofilament wrapped tightly around his muzzle, along with wires and hooks. Snouty is now recovering from his injuries, which have left him disfigured but haven’t dampened his healthy appetite and strong will to live. He’ll soon be returned to the wild for a second chance at life. “He may not be the prettiest boy in the ocean, but great beauty springs from the adversity he has overcome,” says the center. — Read it at the Marine Mammal Center

A researcher from Colorado State University recorded traffic sounds to see how a colony of prairie dogs living away from the road would react to the noise. He found that when they heard the sounds, more of the prairie dogs went underground, and they spent less time looking for food and more time scanning for predators. "I thought they would start habituating to it, or they would realize that it wasn't a threat," said researcher Graeme Shannon. "But that didn't happen in the three months … Prairie dogs have to spend a lot of time above ground, eating to gain weight. This could have consequences on their health." The study was published in the journal Animal Behaviour. — Read it at Live Science

A new study shows that at least some women — and possibly children, too — were close to dogs in the Early Neolithic period, 8,000 years ago. The investigation found that the women ate the same food the dogs ate and suffered from one or more of the same illnesses as the canines. The remains of women from two cemeteries showed they’d suffered from a parasitic infection called hydatid disease, or echinococcosis, which almost always occurs as a result of direct contact with dogs. The study was published in the Journal of Archaeological Science. — Read it at Discovery News 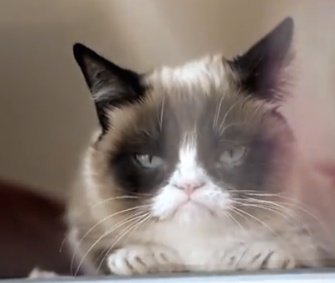 “Cat Summer,” a star-studded music video and commercial for Friskies Grillers, showcases the company’s spokescat, Grumpy Cat with the famous felines Nala Cat, Hamilton the Hipster Cat and Oskar the Blind Cat and Klaus. In the video, the kitties are stuck indoors while their owners have fun in the sun. For every view the video gets until Labor Day, Friskies is donating one meal (up to 1 million meals) to shelter cats around the country, in honor of the late Internet sensation Colonel Meow. — Watch it at YouTube

A street artist is fetching rising prices in a London gallery for his drawings of his Staffordshire Bull Terrier, George. John Dolan was living on the street when he got George, then a puppy, from a homeless woman. He started drawing George and the scenes around him to make pocket change. Now, he’s getting $6,800 for each of his drawings, he has a book out and he’ll soon open a show in Los Angeles. "I mean, John's rise has been really meteoric in the art world, it's like watching an artist's career in fast-forward,” said Richard Howard-Griffin, who mounted the first show of Dolan’s work. — Read it at Today