August 23, 2016: We've scoured the Web to find the best and most compelling animal stories, videos and photos. And it's all right here. 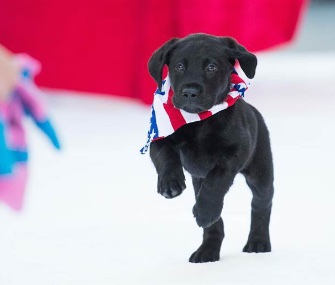 Twitter / TodayPuppy
The "Today" show welcomed an adorable black Lab puppy who's training to be a service dog for a veteran.

There’s an adorable new face on NBC’s “Today.” On Monday, the anchors introduced viewers to their second “puppy with a purpose” — an 8-week-old black Labrador Retriever who is being trained by America’s VetDogs to become a service dog for a veteran. The pup’s instructor, Olivia Poff, will teach him basics like learning to heel, stay, come, push and retrieve objects, and eventually, brace when a person needs help standing up or sitting down. The puppy follows in the steps of a yellow Lab named Wrangler, who stole hearts while he appeared on the morning show until he was ready to move on to his formal guide dog training with Guiding Eyes for the Blind. Viewers got to vote on the new puppy's name, and their choice was revealed on the show Tuesday. He'll be called Charlie. — Read it at Today and follow him on Twitter

Veterinarians in Sydney, Australia, were stunned to spot an entire steak knife in an X-ray of a 6-month-old Staffordshire Bull Terrier puppy. “I've never seen anything like it,” said the Animal Referral Hospital’s Dr. Jody Braddock, who led a team of technicians in inching the serrated knife back up Lexi's esophagus. “We knew that Lexi's best chance for survival would be to remove the knife as soon as possible before it could cause more damage.” The puppy spent three days in intensive care before it was safe to send her home. Amazingly, the puppy who was “within millimeters of death,” survived and is resting at home with her relieved owner. — Read it at UPI

Researchers at the Yerkes National Primate Research Center in Georgia have found that chimpanzees choose to cooperate five times more frequently than they choose to compete, challenging the notion that cooperation is unique to humans. The apes were given thousands of opportunities to pull cooperatively at an apparatus filled with rewards. Either two or three chimps were needed to get the rewards, and while there was plenty of opportunity for competition or aggression, the researchers found that they overwhelmingly chose to work together. The study was published in the journal Proceedings of the National Academy of Sciences. — Read it at Phys.org 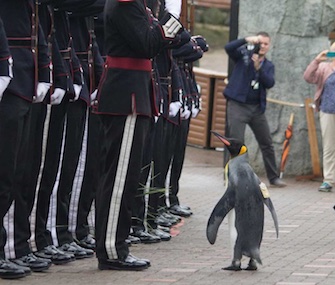 Twitter / EdinburghZoo
Nils Olav inspects the troops at Edinburgh Zoo after being promoted to brigadier.

Sir Nils Olav, already a knight, was promoted to brigadier during a ceremony at the Edinburgh Zoo in Scotland attended by 50 members of the King of Norway’s Guard. The famed penguin proudly strutted along inspecting the soldiers as he was given his prestigious new title. The first Nils Olav was adopted by the unit in 1972, and the current penguin is the third to fulfill the role. He’s visited by the troops every few years and has been promoted through the ranks and held many titles over the years, reported the Independent. “At the tattoo we, of course, have many inspecting officers but this is by far my favourite. Congratulations, Brigadier Olav,” said Brigadier David Allfrey, producer and chief executive of the tattoo. — Read it at the U.K.’s Telegraph

Pippa has a special friend in Martin Studer, the postal carrier who delivers the mail to her home in Brisbane, Australia. Studer often shares photos of the dogs he meets along his route on Facebook, and the Golden Retriever is one of his favorites. Sometimes, though, there’s no mail for Pippa to retrieve. Not wanting to disappoint her, Studer came up with a solution. He scrawled on a parcel delivery notice “Mail for Pippa,” and gave it to the happy dog. Studer has a reputation as a dog lover, and has been known to dress like Santa Claus and pass out dog treats for the holidays. — See photos at Buzzfeed