March 19, 2015: We've scoured the Web to find the best and most compelling animal stories, videos and photos. And it's all right here. 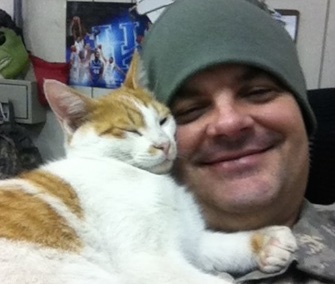 Stanley helped Army National Guard Staff Sergeant Daryl Casey through some tough times away from his family at Camp Buehring in Kuwait. Stanley was part of a litter of kittens born at the base not long after Casey’s arrival, and the soldier quickly bonded with him. “He'd see me coming in and he'd come running up to me and rub against my legs,” Casey said. “When everybody sees him walking around, they go 'Hey there's Daryl's cat!'” Now that Casey is planning to return home to Kentucky in a month, he’s working with the non-profit group Nowzad to bring Stanley with him. The group specializes in getting soldiers’ companion animals home to the U.S. Casey set up a YouCaring page Wednesday morning to raise the $1,300 needed to get Stanley medically cleared and flown to Atlanta — and he surpassed his goal in less than 24 hours. "Getting home will be an absolutely joyful event but just to see that little cat's smiling face when I come in the house, that's just going to be something. I can't wait for it," Casey said. — Watch it at Kentucky’s WKYT

After months of rehabilitation, 83 reptiles, 53 birds and 13 mammals, including wild cats and Capuchin monkeys, were flown back to the Amazon on Tuesday by the Colombian Air Force to be released into the wild. The trafficked animals were thoroughly examined to ensure they wouldn’t spread disease in their natural habitat. "We selected individual animals that could defend themselves in their environment, who weren't too far along in adulthood so they wouldn't fall easy prey," said Lorena Gomez, a biologist with Valle del Cauca’s environmental authority. — Read it from Agence France Presse via Yahoo

New research shows that orangutans sometimes cup their hands around their muzzles to make warning calls to their group louder and deeper. The animals use the calls to warn their group of danger. "Orangutans are the only known primate besides humans to modify and enhance sound production through external manipulation," said researcher Adriano Lameira of Durham University in the U.K. Researchers said it’s also possible the calls are used to tell a potential predator that it’s already been spotted by an orangutan. The study was published in the Journal of Experimental Biology. — Read it at Live Science 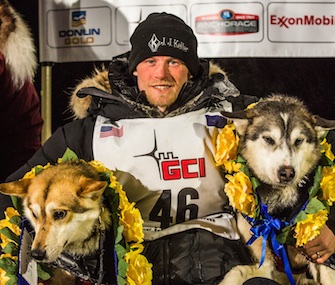 For the last four years, either Dallas Seavey or his father, Mitch, have won the 1,000-mile Iditarod sled dog race through Alaska. Early Wednesday morning, 28-year-old Dallas and his team arrived in Nome to win this year’s trek. Four hours later, his dad, who won last year, took second place, prompting reporters to ask if this was a family dynasty. "As far as the family aspect, I think the biggest part with my dad and I is we push each other. What dad wants to get beat by his son? What son wants to get beat by his dad?" said Dallas. Mitch congratulated his son when he finished. "It's really nice to see. And, uh, yeah, second place is not too bad. I wish I had won," he said. Dallas’ win makes him the Iditarod’s only three-time winner. His father has won the title twice. — Read it at Alaska’s News Miner

Last year, Vetstreet ran a story about Annie Blumenfeld of Fairfield, Connecticut, who’s been working tirelessly to raise awareness about prevention of heartworm disease through her non-profit group, Wags4Hope. After lobbying for more than a year, the teenager convinced Connecticut legislators to include a heartworm checkbox on the state’s dog license application form. “I am so excited to have spearheaded this change and that 100,000 copies were ordered,” Blumenfeld said. “I was asked to draw a ‘mutt’ as well on the form. Connecticut is believed to be the first to have such a message and I hope other states will follow!” — Read more at the Wags4Hope Facebook page