Dec. 7, 2016: We've scoured the Web to find the best and most compelling animal stories, videos and photos. And it's all right here. 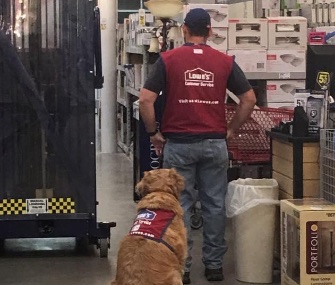 Twitter / Lowe's
Charlotte wears her own red Lowe's vest as she works by her veteran owner's side.

A photo of two new employees at the Lowe’s home improvement store in Abilene, Texas, has gone viral. That’s because the store recently hired Air Force veteran Clay Luthy — along with his service dog, a 10-year-old yellow Labrador Retriever mix named Charlotte. “We knew he was gonna make a great employee — we just got the benefit of getting Charlotte right along with him,” said Jay Fellers, Lowe’s human resources manager. Luthy, who always has Charlotte by his side, was surprised by all the attention. “I found a way to have a productive life and my prescription is four-legged,” he said. Charlotte isn’t the chain’s first canine employee. Earlier this year, a Lowe’s in Canada made headlines when it hired a man with a brain injury and his service dog, Blue. — Watch it at Seattle’s KING 5

Gatlinburg, Tennessee, resident Mark Burger didn’t get the alert to evacuate his condo last week as a deadly wildfire moved dangerously close. But thankfully, his cat’s unusual behavior made him investigate. The normally calm Siamese seemed to be trying to get Burger’s attention while he stared out the window and rushed back and forth between the door and his owner. “I figured I might as well take out the trash and take a look to see if an animal like a raccoon might be making Tiger nervous,” Burger said. “When I got across the lot, I could see the flames all over the mountains across from my condo.” Burger, 60, believes that if it weren’t for Tiger, he might not have survived the fire. Once he saw the flames, he quickly ran inside, got his cat, and evacuated. Officials acknowledged that evacuation alerts sent to the mobile devices of many vulnerable residents never reached them. — Read it at the Washington Post

Deputies, firefighters, a rescue team and veterinarians worked together to save a horse who’d become trapped in a pond in Lakeland, Florida, on Saturday. The 20-year-old mare Quarter horse was stuck in about six feet of muck. “Only the head and small a portion of the horse’s back were visible; the rest of the horse’s body was submerged,” said Polk County Sheriff’s Office spokesperson Donna Wood.The mare was carefully lifted out of the water using a system of ropes and pulleys. A veterinarian who examined her said she was in stable condition after her ordeal. — Watch it at Tampa’s Fox 13 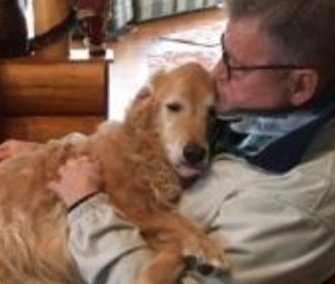 Fox 9
Zoey cuddles with her owner after they were reunited this week.

Zoey the Golden Retriever is “a happy boy” now that he’s back at his Minnesota home. The dog was traveling back from a trip to a cabin with his owner on Nov. 18 when their vehicle was struck by a semi truck. Zoey was ejected from the SUV’s back window in the impact, and his owner, Daryl Algren, who was injured in the crash, said he could see Zoey walking along the road afterward. But sheriff’s deputies couldn’t catch him before paramedics had to take Algren to the hospital. The worried owner drove to the area every day for two weeks to search for Zoey. Recently, a local homeowner spotted the dog, so they laid out a blanket with food and Algren’s clothes in their yard — and they found the shivering dog lying there on Monday morning. Zoey and Algren were reunited, and the dog is recovering at home in time for the holidays. — Watch it at Minnesota’s Fox 9

Will the Trumps Get a Goldendoodle?

As far as the public knows, the incoming first family doesn’t have any pets. But Lois Pope, a longtime friend of President-elect Donald Trump, is trying to change that. The philanthropist and animal welfare advocate says a 9-week-old Goldendoodle who’s the offspring of hero military dogs would be a perfect fit for the Trumps. Pope says she showed a photo of the puppy, named Patton after a general Trump admires, to the president-elect over Thanksgiving at his Florida estate — and Trump asked her to show his youngest son, Barron. There’s been no official word from the Trump camp about the puppy, but Pope says she’s confident Patton will be a White House dog. — Read it at CBS News