August 21, 2012: We've scoured the Web to find the best and most compelling animal stories, videos and photos. And it's all right here. 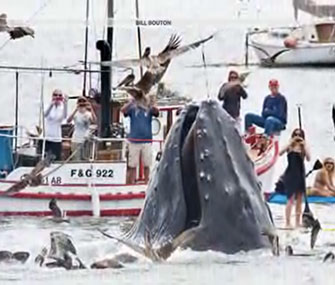 Today
One of the humpback whales that Bill Bouton photographed off the California coast.

Dozens of brave witnesses had the experience of a lifetime on Saturday when they got up close and personal with a pod of massive humpback whales who were lunging out of shallow waters off the California coast to feed on pelicans and seagulls. Retired high school biology teacher Bill Bouton, who was in the area to photograph birds, acted quickly to take a series of amazing pictures, which have gone viral. — See the photos and watch it at Today

Plus: Massachusetts scientists are studying the unique feeding patterns of humpback whales off Cape Cod in order to influence changes in fishing and shipping rules to protect the animals. — Read it at The New York Times

We often read sad stories of headline-making obese cats who don’t survive. But Tiny, who tipped the scales at over 30 pounds when he was left at a Canadian shelter in December, has been steadily — and safely — shedding his excess weight under the close watch of a veterinarian. Tiny’s last weight check showed that he’s finally below 20 pounds. “I was shocked at how big he was,” recalled Dr. Nicole Jewett of seeing Tiny for the first time. — Read it at Today, and follow his progress on Facebook

This may be the one place where you can leave your pooch without feeling guilty. After finding success in Hollywood, D Pet Hotels is debuting locations in Manhattan and Scottsdale, Ariz. The luxury hotels, which only cater to dogs, feature air-conditioned dog parks, full-sized beds, flat-screen TVs and chauffeured rides in Lamborghini and Porsche cars. — Read it at AFP 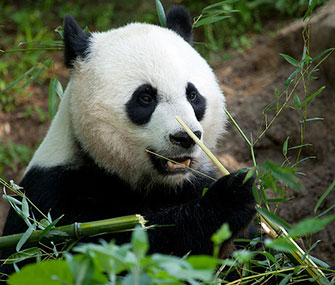 Mehgan Murphy, Smithsonian's National Zoo
The National Zoo is hoping that Mei Xiang has a cub this year.

Hopes for a Possible Cub Rise With Panda’s Hormones at D.C. Zoo

The baby watch is intensifying at the National Zoo in Washington, D.C., after scientists confirmed a rise in panda Mei Xiang’s hormones, and her keepers reported that she’s building a nest in her den. Both could be signs of a pregnancy — or a pseudopregnancy. Since 2007, Mei Xiang has had five pseudopregnancies, but the zoo is hopeful that she’ll give birth this year. She and her partner, Tian Tian, have only had one cub so far, and the Washington Post reports that she may be replaced with another panda if she doesn’t conceive. — Read more from the National Zoo

Plus: Across the country at the San Diego Zoo, which has the most successful giant panda breeding facility outside of China, the panda team caught a glimpse of Bai Yun’s newborn cub, who’s starting to develop black-and-white markings. — See the photo at Instagram

The excessively spoiled feline known as Choupette celebrated her first birthday on Saturday with a shrimp “cake.” Her doting fashion designer dad tweeted a photo of her with the treat, along with a greeting. — Read it at People Pets, and learn about her recent photo spread in Harper’s Bazaar