Oct. 25, 2013: We've scoured the Web to find the best and most compelling animal stories, videos and photos. And it's all right here. 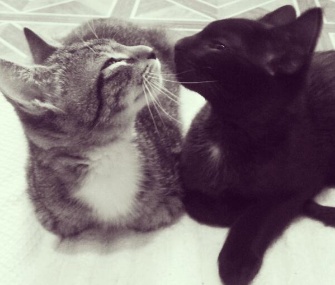 Kath / Twitter
Arthur, left, and August settle into a new life 6 weeks after making headlines by shutting down the New York subway for hours.

The tiny kittens who managed to stop the B and Q subway lines in New York for two hours as they eluded authorities trying to catch them on the tracks on day in August have found their way to a forever home. Arthur and August, who have spent the last six weeks being fostered by Steven Liu, 25, and his roommates in Bushwick, N.Y., have spent the last few days with Katherine and Keith Lubeley, a Brooklyn couple. They were chosen by Animal Care & Control from among hundreds of applicants. "We had been thinking about adopting rescue cats for a while and specifically wanted two bonded kittens … And these two have a crazy special bond!" said the Lubeleys. "They are having a rollicking good time getting to know their new kingdom." Although the pair had been quite shy when they first arrived at their foster home, “the boys are more social every day” in their new apartment, Katherine Tweeted. — Read it at People Pets

The owners of the dog who Guinness deemed the world’s tallest have announced that he passed away on Oct. 17. “We appreciate the love and support you have given Giant George over the last several years,” said owners David and Christine Nasser. The Great Dane was nearly 8 years old, and measured 3 feet, 7 inches from paw to shoulder. He was almost 7 feet long. Giant George and his family made appearances on several morning shows after he was given the Guinness title for the World’s Tallest Dog. According to his website, he was actually the runt of his litter. “This big Great Dane was scared of water, scared of dogs a fraction of his size and, most of all, scared of being alone,” the site said. — Read it at ABC News

Earlier this month, researchers mounted collars with cameras on the necks of two bison at the Nature Conservancy’s Dunn Ranch Prairie inMissouri. It’s the first time bison have worn the 1-pound cameras, but they’ve been attached to more than 70 other species to give researchers an idea of how wild animals behave in their natural settings. The scientists are hoping to learn more specifics on what types of plants the bison eat. They chose bison who were already used to wearing GPS collars to wear the Crittercams, which will record 10 hours of footage controlled by an onboard computer. — Read it at National Geographic 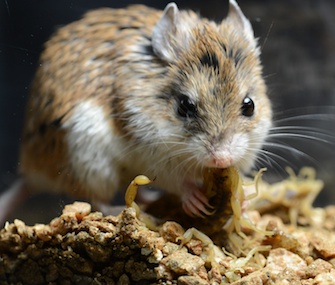 Ashlee Rowe, Michigan State University
The grasshopper mouse has evolved to not feel the pain of a bark scorpion's sting.

Though it has one of the most painful and deadly stings in the animal kingdom, the bark scorpion is just a tasty little snack for grasshopper mice. Thanks to evolution, the little mice feel no pain as they munch on the scorpions in the desert, but humans or other mice would suffer from intense burning or throbbing if they tried to do the same. "The grasshopper mouse has developed the evolutionary equivalent of martial arts to use the scorpions' greatest strength against them," said Ashlee Rowe of Michigan State University. The researchers discovered that the grasshopper mouse had a modification to pain receptors that made the toxin act as a pain reliever instead of a pain stimulant. But they still don’t understand why the venom didn’t kill the mice. The study was published in the journal Science. — Read it at the Los Angeles Times