Sept. 10, 2013: We've scoured the Web to find the best and most compelling animal stories, videos and photos. And it's all right here. 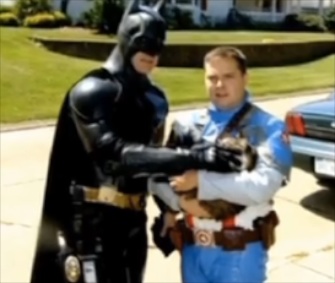 People Pets
Captain America holds the cat that he and Batman saved from a house fire.

Last weekend, John Buckland and Troy Marcum demonstrated what real superheroes do. The two were dressed up as Batman and Captain America, respectively, and were working at a children’s event on Saturday in West Virginia when they spotted smoke coming from a nearby home. Buckland, who’s a former firefighter, Marcum, and another bystander ran to the scene, kicked in the door and found a cat trapped inside. The owners weren’t at home. The animal was unresponsive — until Batman resuscitated it. “The cat comes around, takes a look at me, then hissed!” Buckland said. “He got resuscitated by Batman, that's a pretty scary thing to wake up to.” — Watch it at People Pets

Despite the Mexican government’s strict stance on logging in the Monarch butterfly’s winter nesting grounds in the central part of the country, a new study comparing aerial photos of the land from 2001 with those from 2011 shows that small-scale logging has never stopped. "Small-scale logging is a serious and growing concern for the conservation of the Monarch sanctuaries," the report said. Small-scale logging is often done by local residents, some of whom own the land in the reserve. Omar Vidal, of Mexico’s chapter of the World Wildlife Fund, who headed the study, said that the impoverished local communities should be paid more to compensate for them not cutting down the trees. — Read it from the AP via Yahoo

A baby African elephant born at Zoo Vienna in Austria is the first calf to be born after being conceived with frozen semen. The father is a wild bull at the Phinda Game Reserve in South Africa. He was placed under general anesthesia for the collection, and the sperm had to be frozen in order for it to be transported to Europe. The technique, which gives zoos the chance to strengthen the genetics of the African elephant population, had been tried twice before but both pregnancies ended early. The baby girl was born to 28-year-old Tonga on Sept. 4, and is developing a close bond with her mom. The dedicated mother will raise the calf on her own. — Read it at Zooborns 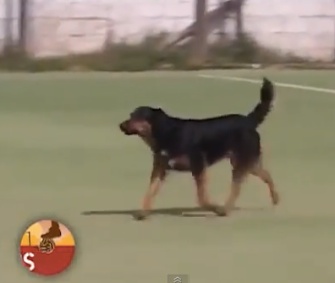 YouTube
A dog walked onto a soccer field in Argentina, and scored a goal.

During a five-on-five soccer game in Argentina, a player with four legs and natural talent scored a goal — with a header. The dog wandered onto the field during a pickup game and was standing by the corner of the goal when one of the players made a kick. He hit the ball with his nose, knocking it right into the net. The proud pooch then trotted back down the field to get ready for the next play. — Watch it at the New England Sports Network

Why Are Cats So Grumpy?

In his new book, Cat Sense, John Bradshaw explains why your feline companion may sometimes look like she’s about to strike out at you — and why cats like Grumpy Cat and Henri, Le Chat Noir, are such a viral sensation. "Their ability to be social ... is only a few thousand years old," Bradshaw said. "The cat's domestication is incomplete, in terms of its need to continue hunting and also in terms of its ability to socialize. One of the consequences of that is it has a rather unexpressive face." And, humans then project onto that face our own ideas about what the cat might be thinking — such as Grumpy Cat’s grumblings or Henri’s ennui. — Read it at NBC News