Dec. 22, 2014: We've scoured the Web to find the best and most compelling animal stories, videos and photos. And it's all right here. 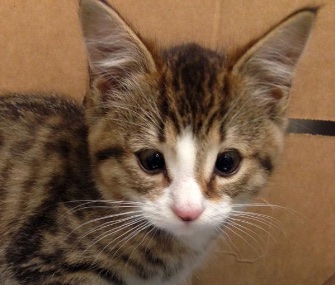 Little Phil was born without eyelids, leaving him with a painful condition called agenesis that would have left him blind. The homeless kitten and his friend, Vixen, were taken in by a Boston Animal Control shelter, where MSPCA adoption center manager Alyssa Krieger met them last month. Krieger was struck by how happy and playful Phil was, despite his condition. She brought the pair back to the MSPCA’s Angell Animal Medical Center, and ophthalmologist Dr. Martin Coster performed surgery last week to give Phil eyelids. “By taking some tissue from Phil’s lip and attaching it to the muscles that enable him to blink, we can, in effect, reconstruct his missing eyelids,” Coster said. He said the surgery, which was paid for through donations to Spike’s Fund, went well and Phil is expected to make a full recovery and live a healthy life. Within the next few weeks, 3-month-old Phil and Vixen will be available for adoption, and Krieger said she’ll do everything she can to keep the pair together. — Read it at Boston Magazine

U.S. District Judge Beryl A. Howell called a 2012 decision by the U.S. Fish and Wildlife Service to remove gray wolves in the western Great Lakes region from the endangered species list and give management responsibilities to three states "arbitrary and capricious." With his ruling, he restored the animals’ federal protections. Since the 2012 FWS decision, Michigan, Minnesota and Wisconsin have allowed wolves to be hunted. Friday’s ruling bans hunting and trapping of the wolves. The ruling also creates stricter standards for taking an animal off the endangered species list. — Read it at the Los Angeles Times

In a landmark ruling, a court in Argentina recognized an orangutan held in an Argentine zoo as a "non-human person" unlawfully deprived of its freedom. The court said the 29-year-old ape, Sandra, can be freed and moved to a sanctuary. Animal rights campaigners had filed a habeus corpus petition on Sandra’s behalf last month. The Association of Officials and Lawyers for Animal Rights (AFADA) argued Sandra had sufficient cognitive functions and should not be treated as an object. Earlier this month, a U.S. court threw out a bid for freedom for Tommy, a privately owned chimpanzee who lives in New York state. — Read it from Reuters via Yahoo 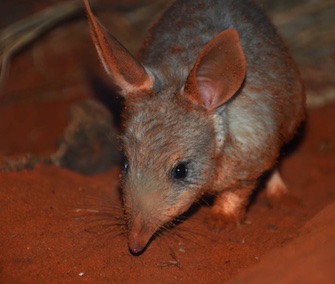 Taronga Zoo
Two bilby joeys were born at the Taronga Zoo exhibit visited by the Duke and Duchess of Cambridge and their son, Prince George, in April.

Two bilby joeys were born 10 weeks ago at Australia’s Taronga Zoo but have just started to explore outside their underground nest with their mom, Yajala. They’re the first bilbies to be born at the zoo. Their exhibit is named after young Prince George, who visited their parents along with the Duke and Duchess of Cambridge in April. “I’d like to think there was a little royal magic at work in the birth of these joeys,” said keeper Paul Davies. “You could say the Duke and Duchess of Cambridge brought us good luck, as it’s after their visit that we’ve been able to breed bilbies for the very first time.” The staff hasn’t yet been able to determine the gender of the joeys, who still spend a lot of their time underground. — See photos at Zooborns

Phillip Maxwell had his two dogs with him when he was seriously injured in a rollover car crash on Interstate 94 in North Dakota on Dec. 7. Jake, a miniature Pinscher, stayed by the vehicle, but Tracy, a German Shepherd, ran off. Tracy was spotted in the area, but was too scared to allow anyone to help her. She did seem to be staying in a barn, where volunteers had put out blankets, food and water for her. Finally, a man who lives on a farm about two miles from the crash site was able to lure her to safety Saturday — with the help of a meatball. Tracy appears to be healthy and will be reunited with Jake at the Valley City Veterinary Hospital. Maxwell is still recovering in the hospital, so the dogs will be picked up by his family members from out of state in a few days. — Read it at North Dakota’s WDAZ