Feb. 3, 2016: We've scoured the Web to find the best and most compelling animal stories, videos and photos. And it's all right here. 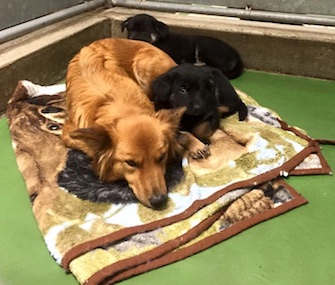 Dog Sneaks Out to Cuddle Puppies

Maggie’s puppies were recently adopted, but her maternal instinct is still going strong. The Australian Shepherd mix had been boarding at the Barkers Pet Motel in Canada for about a week when two 9-week-old puppies arrived from a local rescue to be fostered. After the staff had left for dinner, surveillance cameras showed Maggie sneaking out of her own pen and searching for the puppies she heard crying. Once she found them, she parked herself outside their pen, getting as close to them as she could. Barkers owner Sandy Aldred spotted the scene on a live video feed on her phone and returned to check on everyone. “She just decided that was where she was going to stay until we came to get her," Aldred said. "It was really sweet. She just had to be with those puppies." Aldred let Maggie into the pen and watched to make sure she and the puppies were OK together. "They were just all so happy to be together. The puppies needed her and she needed them. It was pretty perfect." The three stayed together all night, and Maggie was still cuddled up with them when the staff returned the next morning. Maggie, who was recently adopted, is now back home with her family. The puppies, Hannah and Kari, are spending their nights in the homes of staffers. They are up for adoption. — Read it at Canada’s CBC News

Scientists have found that ravens seem to know when a rival who might steal their food is watching them, and they take steps to hide their food. Ravens are known to try to grab more than their share of a common food source and set it aside for later in a cache. Ravens who aren’t fast enough to grab from the original food source often raid the others’ caches. In their experiments, researchers found that when a raven could see a rival raven nearby, they would guard their cache and replenish it less frequently to avoid giving the location away. Even when they couldn’t see a rival, there was evidence they could perceive a threat and would protect their food. The study was published in the journal Nature Communications. — Read it at Live Science

Old dogs can learn new tricks — but they’re a little slower at it. A new study from the University of Veterinary Medicine Vienna finds aging affects the cognitive abilities of dogs. The researchers used a touchscreen to test how quickly Border Collies between the ages of 5 months and 13 years were capable of learning, and found that older dogs learned more slowly than their younger peers. “The test also showed that older dogs are less flexible in their way of thinking than younger ones. As in people, older dogs find it more difficult to change old habits or what they have learned," said lead author Lisa Wallis. The dogs’ long-term memory, however, was not affected by age. The study was published in the journal AGE. — Read it at Science Daily 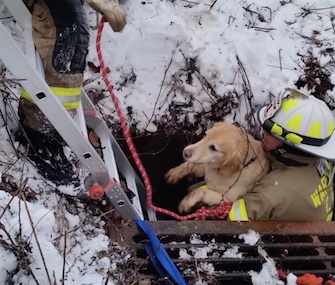 Firefighters from several communities came together to save a Labrador Retriever mix who plummeted 8 feet down into a snow-covered storm drain in the middle of a field in New Jersey on Sunday afternoon. They first had to secure the heavy, cast-iron drain lid and grate so it wouldn’t fall on Bailey. That was difficult to do because of the “immense amount of snow” on the ground, the Warren Township Fire Department said in a news release. The firefighters were then able to use a ladder to climb down into the drain and rescue the dog, who’d been trapped for 90 minutes. “Needless to say, Bailey was quiteecstatic forfreedom and the owner took the animal home for a nice bath,” the department said. — Read it and see more photos at NJ.com

An unusual customer showed up at a souvenir shop in La Jolla, California, recently. A sea lion climbed 145 steps from the beach to browse at The Cave Store just before closing one night last month. Store manager Rachelle Agosti shared photos on Facebook of the animal checking out the store’s trinkets and making a stop at an ice cream freezer. He didn’t buy anything, and returned to the water with Agosti’s guidance. “He wandered around the store for nearly 10 minutes, confused and scared before I got him out the back door, through the garden gate, and heading back to the ocean!” — See photos at Buzzfeed