Oct. 12, 2016: We've scoured the Web to find the best and most compelling animal stories, videos and photos. And it's all right here. 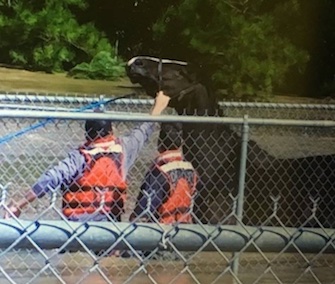 Cumberland County Sheriff / Facebook
Rescue crews waded through floodwaters to help Bob the horse out of his pen in North Carolina.

Rescue crews in North Carolina fought a current to wade through waist-deep water left by Hurricane Matthew to reach a horse trapped in his pen on Sunday. The rescuers hooked their life vests up to each other before leaving their Zodiac to try to get to Bob, the 6-year-old horse. They then fastened the horse to their vests and made their way through even deeper waters before they reached higher ground. Bob is “doing pretty darn good” despite his ordeal, said Jennifer Hutchinson-Tracy, the shelter manager of Cumberland County Animal Control, reported ABC News. Unfortunately, he hasn’t had an easy life, and his owners can no longer keep him. He’s now up for adoption, and the shelter has already gotten dozens of calls from people interested in giving Bob a home. — Read it at North Carolina’s WRAL

Mattis, a police dog in Alpharetta, Georgia, had to go through emergency surgery after unknowingly leaping off a 30-foot wall while chasing two suspects on Saturday. The K9 suffered a lacerated liver and internal bleeding, but pulled through and, though it will be a long road to recovery,is expected to be fine. The suspects, who allegedly stole dozens of cell phones and credit cards, were apprehended. The police department thanked the community for its outpouring of support for Mattis. — Read it from the Alpharetta Department of Public Safety via Facebook

For the first time, video cameras have recorded evidence of wild chimpanzee moms teaching their offspring to use tools. “We found that mother chimpanzees in the Goualougo Triangle teach by transferring termite-fishing probes to their offspring,” said study author Stephanie Musgrave of Washington University in St. Louis. “In this population, chimpanzees select specific herb species to make their fishing probes, and they produce probes that have a particular brush-tipped design. By sharing tools, mothers may teach their offspring the appropriate material and form for manufacturing fishing probes.” The study was published in the journal Scientific Reports. — Read it at Science Daily 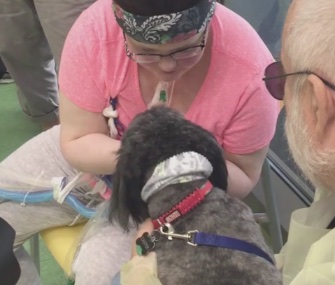 ABC News
Emily Reimer, 19, was reunited with her dogs at St. Louis Children's Hospital this month.


After spending more than a year in the hospital, Emily Reimer, 19, was delighted to see two special visitors earlier this month: her family’s dogs. Reimer has been fighting a rare blood disorder since she was a baby, and has been recovering from a bone marrow transplant and open heart surgery at the St. Louis Children’s Hospital. Earlier this year, the hospital opened a pet center where young patients can visit with their family pets to get emotional support. Emily got a visit from her family’s Havanese, Casper, and her grandparents’ Poodle, Thor. “There was sheer joy on her face when she saw them,” said mom Amy Reimer. “It seemed like it was a little piece of home having them come and see her … It gave her a little bit of new life. I was happy to see her happy.” — Watch it at ABC News and read it at Illinois’ WJBD Radio

In May, Brandon Fitton dropped his boat off for repair in Salt Lake City, about 35 miles from his Mountain Green, Utah, home. He didn’t realize that his family’s cat, Mittens, had stowed away under the cover, and when mechanics pulled it back, he jumped out and took off. Last month, he showed up in the driveway of a Park City, Utah, resident, who fed him, gave him TLC and brought him to her vet. There, they discovered Mittens’ microchip, and he was happily reunited with the Fitton family. Based on Mittens’ condition, the veterinarian believed the cat had walked the 32 miles from Salt Lake to Park City, crossing several mountains on his trek. “I’ll bet that Mittens would have found his way back home without our help. He’s a real miracle cat,” Dr. Carl Prior. — Read it at People Pets