Jan. 9, 2015: We've scoured the Web to find the best and most compelling animal stories, videos and photos. And it's all right here. 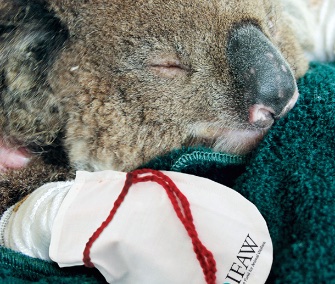 John Paoloni, IFAW
The IFAW is asking volunteers to make mittens for koalas recovering from burns on their paws.

The International Fund for Animal Welfare announced Wednesday that it’s taking action to save koalas threatened by bush fires in New South Wales, Australia. Many of the animals suffered burns on their paws as they tried to get out of burning trees. The group asked volunteers to make mittens that keep the koalas’ injured paws clean, allow the burn cream to work more effectively and prevent further injury. It can take up to a year for the koalas’ burned paws to heal, so there’s a demand for hundreds of pairs for each injured animal. The IFAW provided a diagram with instructions on how to make the paw protectors from clean cotton — and just a day later, people had pledged to make more than 500 pairs. "Some people are making up to 100 mittens," said Josey Sharrad of the IFAW’s Sydney branch. "It's fantastic. We didn't expect this response. We've been inundated, and it's been brilliant." — Read it at Today

Study: Monkeys Can Learn Recognize Themselves in the Mirror

When rhesus monkeys look in a mirror, they don’t realize they’re looking at their own faces — but a new study finds they can learn the concept. With training, the monkeys in the study developed mirror self-recognition, and went on to use the mirrors to check out parts of their bodies that they don’t normally see. "Our findings suggest that the monkey brain has the basic 'hardware' [for mirror self-recognition], but they need appropriate training to acquire the 'software' to achieve self-recognition," says Neng Gong of the Chinese Academy of Sciences. The study was published in the journal Current Biology. — Read it at Live Science


Snowy Owl Sightings on the Rise in North America

The initial results of the National Audubon Society’s annual Christmas bird count finds this may be the fourth year in a row with high numbers of snowy owl sightings in southern Ontario, the Great Lakes and the U.S. Northeast. Previously, the birds had rarely been seen outside the Arctic. "They don't usually come down this far. When they do, it's a real treat," said Geoff LeBaron, the count’s project leader. As of Wednesday, there were 303 snowy owl sightings with just a fifth of the counting sessions totaled. Last year's final tally was 1,117 snowy owls, nearly double the previous high of 563 from the 2011 count. "This is a big flight," LeBaron said. — Read it from Reuters via Yahoo 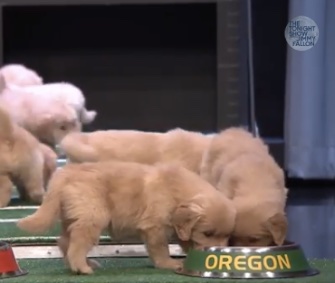 
On Wednesday, Jimmy Fallon had a crack team of sports prognosticators weigh in on the outcome of the upcoming 2015 college football national championship game between the Ohio State Buckeyes and Oregon Ducks. “When it comes to predicting things, we have a secret weapon — and it’s puppies,” Fallon said on the Tonight Show. He offered seven fluffy Golden Retriever Puppy Predictors two bowls of kibble, one for Ohio State and one for Oregon. Fallon called it for Oregon with the most puppies at its bowl, even though there were only two — the others were wandering around the set, sniffing — but any predictions may have been invalidated when one of the pups peed in the Ohio State bowl. Whoops! You can see if they’re right when the national championship game airs Monday at 8:30 p.m. ET on ESPN. — Watch it at People Pets


Kitten Born Without Eyelids Gets a Home

There’s a happy ending for Phil, the homeless kitten we told you about last month. Phil, who was born without eyelids, was taken to a Boston animal shelter with his best friend, Vixen. Phil would have gone blind if it weren’t for the surgery provided at the MSPCA’s Angell Animal Medical Center. The surgery was a success, but Phil and Vixen had to be separated for weeks afterward because veterinarians were afraid Vixen would try to groom Phil. On Thursday, the MSPCA-Angell shared a sweet video of their reunion on Facebook, and announced that the duo is now settling in to a new forever home together. — See updates on Phil and Vixen from MSPCA-Angell on Facebook