July 25, 2016: We've scoured the Web to find the best and most compelling animal stories, videos and photos. And it's all right here. 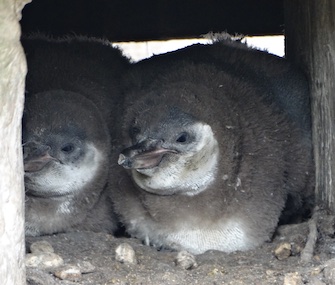 Cotswold Wildlife Park
Basil and MJ are being raised by their dad after their mom passed away.

Three 2-month-old Humboldt penguins have finally emerged from their nests at the U.K.’s Cotswold Wildlife Park. Two of the rare chicks were the offspring of 24-year-old Mushy, who was the park’s oldest penguin. Sadly, she recently passed away from an age-related illness. Now her mate, Wonky, is raising the female chicks, named Basil and MJ, on his own. So far, they’ve been healthy and developing well under their dad’s watchful eye. The third chick’s name is Peanut, and her parents are named DJ and Mrs. Doyle. All three have successfully fledged and have been swimming with the rest of their colony in the Penguin Pool. Humboldt penguins are becoming increasingly rare, with only about 12,000 left in the wild.

More than 45,000 pets have been adopted this month as part of the second annual Clear the Shelters campaign, which included more than 680 shelters around the country. The NBC-sponsored adoption drive resulted in 20,000 animals finding new homes on Saturday alone. At many participating shelters, adoption fees were waived or reduced, and many of them also waived spaying and neutering costs. “Happy, happy tears,” read the caption of a Facebook photo of shelter workers standing in empty kennels at the BARCS Animal Shelter in Baltimore on Saturday. All of that shelter’s 72 residents found homes in just six hours. — Read it at NBC Bay Area

Veterinary researchers at the University of Saskatchewan have helped produce three wood bison calves using in vitro fertilization for the first time. Bison cows gave birth to three calves through IVF earlier this month. A fourth calf was produced using a frozen embryo that was taken from a bison cow back in 2012 and transferred to surrogate cow in 2015, in another reproductive first for the species. The bison, which is indigenous to Canada, is threatened by disease and loss of habitat. There are an estimated 5,000 to 7,000 of them left in the wild, and researchers are hopeful these new techniques can help the species. — Read it at Science Daily 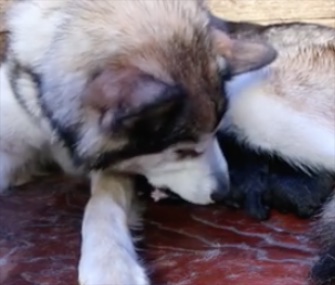 Doting Husky mom Annie gave birth to the latest litter of rangers-to-be at Denali National Park in Alaska on Saturday. Mom and her “happy and healthy” puppies are “doing great,” but their caretakers are watching closely to make sure everyone gets enough rest during the first few days so they continue to thrive. The puppies will one day join the park’s staff of 30 to 35 canine rangers. Specially bred sled dogs have helped maintain the park’s unique environment since 1922, and Denali is the only national park with canine rangers. Stay tuned to the park’s Facebook page to find out when their ever-popular puppy cam will be ready to watch. — See video from Denali National Park via Facebook and see more photos of the Denali dogs

A 14-year-old boy who became separated from his group at a summer camp in Mexico found a loyal companion to help him through his ordeal. The boy, Juan Heriberto Trevino, was searching for firewood when he slipped and fell down a ravine. He was injured and disoriented, but thankfully, he wasn’t alone. Max, a yellow Labrador Retriever who Trevino had met earlier at camp, had followed him on his trek, and down into the ravine. Max stuck by the boy’s side, keeping him warm as the temperature dropped overnight. After 44 hours, searchers found the pair and airlifted them to safety. As it turned out, Max was lost, too — and he was reunited with his family. — Read it at The Dodo