August 22, 2014: We've scoured the Web to find the best and most compelling animal stories, videos and photos. And it's all right here. 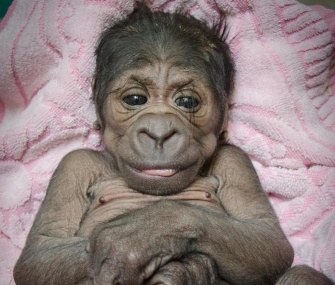 This sweet baby western lowland gorilla was born to mom Ndjole and dad Togo August 16 at the Oklahoma City Zoo. The infant weighed about 4 pounds at birth and appears to be healthy and strong but veterinarians and zookeepers had to step in when her mom wasn’t caring for her. “Ndjole was given several opportunities to bond with her baby within the first 24 hours and didn’t show any interest in her, putting the newborn’s life at risk,” said veterinarian Dr. Jennifer D’Agostino in a statement. The baby is now being given around-the-clock care by the zoo’s animal care team. They hope to reunite her with other gorillas as soon as possible. Western lowland gorillas are critically endangered. — Read it at ABC 7 Chicago and see more cute zoo baby photos

Seals and Seal Lions May Have Brought TB to Americas

A popular theory has been that Europeans brought tuberculosis to the New World when they arrived here. But a new analysis of three ancient Peruvian human skeletons that date back far before Europeans arrived in the Americas shows evidence of tuberculosis. One researcher suggested the Peruvians may have caught the disease from seals that once lived in African and swam to the Americas. "We all laughed; we were all thinking that was kind of a joke," said lead researcher Kirsten Bos of the University of Tübingen in Germany. "Then, we got our hands on some seal TB sequences. We plugged them into our TB family tree, and wouldn't you know: They were branching with our Peruvian samples." Still, it’s unclear whether the seal strains of TB infected many people or just an isolated few. The study was published in the journal Nature. — Read it at Live Science

Saturday marks a special day at Washington, D.C.’s National Zoo: giant panda Bao Bao’s first birthday. Bao Bao and her mom, Mei Xiang, will celebrate by indulging in a frozen cake while human guests enjoy traditional Chinese dishes. The zoo was thrilled to welcome the healthy cub last summer after the devastating death of Mei’s 6-day-old baby the year before. — Read it at the National Zoo 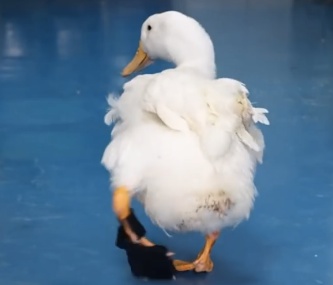 Duck Gets a 3D-printed Brace

A duck in Taiwan is off and waddling again thanks to a custom made 3D-printed brace. Quack Quack was unable to walk comfortable after his left leg and foot were severely injured when he was attacked by a dog a few months ago. Veterinarians at National Taiwan University Animal Hospital turned to the Taipei-based design and technology group Lung X Lung Design for help. It took several attempts to create a 3D model of Quack Quack’s foot before they could finally print out the brace and shoe for him. At first, Quack Quack struggled to walk with his new device, but it didn’t take him long to figure it out. He was walking with it in 15 minutes. Creating the brace took about two months and cost about $3,300, but animal welfare groups say they’re hoping the cost will come down so more animals can benefit from the technology. — Read it at the Huffington Post

The Milwaukee Brewers made headlines earlier this year when the team adopted a small white dog who wandered onto their playing field during spring training in Phoenix. The team named the pooch Hank after baseball legend Hank Aaron and made him their mascot. But Thursday might have been the biggest day yet for dog Hank, when he got the chance to hang out with 80-year-old Hank Aaron. “One hammered baseballs, one chases them. Hank the ‪#BallparkPup meets his namesake, ‪@HenryLouisAaron. ‪#HankMeetsHank,” the Brewers Tweeted, with a photo of the two Hanks. — See photo at USA Today