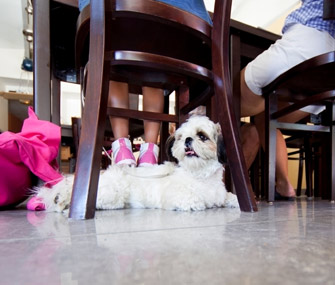 iStockphoto
Are more restaurants and travel attractions becoming pet-friendly, or are cities just doing a better job of advertising them? We investigate.

Thinking of vacationing with your dog this summer? You're not alone.

By some counts, the number of people who take their dog along when traveling has nearly doubled in the past 10 years. For instance, the number of respondents to the APPA Pet Owners Survey, who say they bring their dog when they're away from home for two nights or more, almost doubled over the past 10 years, from 19 percent in 2004 to 37 percent in 2014.

Why is that? One reason is probably because it's gotten much easier to plan a trip. Though there have been pet-friendly guidebooks for quite a while, pet travel websites have really taken off, making planning a less daunting prospect.

Amy Burkert of GoPetFriendly.com says the inspiration for starting her website was the first trip,a 3-and-a-half-week road trip up to Canada in 2008,she tried to planwith her dog. Finding hotels that allowed a larger dog and didn't charge an exorbitant fee was a major research project, and that was just the lodging. Once she'd arranged the hotels, she realized, "I don't know where the dog parks are; I don't know if we're driving past a pet-friendly beach. I've spent two days just finding out where we're going to sleep."

Now it's much easier. There are several pet-friendly travel sites, and more people are using them all the time. Representatives from BringFido.com say their traffic has been nearly doubling by the year, and Burkert says GoPetFriendly.com's traffic has basically doubled in the past two years. And while more people are looking for places to go with their pets, there are more places all the time for those sites to list. A survey by the American Hotel and Lodging Association found that the number of member hotels allowing pets has gone up to 60 percent last year from 52 percent in 2010.

Websites can be more up to date than guidebooks, which is important, because policies are always changing. Burkert says that although she's noticed an increase in the total number of pet-friendly hotels, not every hotel that tries a pet-friendly policy stays that way.

"I'm getting notifications on a pretty regular basis to take hotels off the site, that they are no longer pet friendly," she says. She recently asked a hotel manager why, since the market was clearly growing. "The reason that he gave me was that barking dogs in the hotel was costing them too much money, because they were having to reimburse other guests for their stay," she says.

So that pet fee goes toward more than just cleaning, and if we want to be able to keep traveling with our dogs, we need to be responsible and considerate owners. "If your dog is going to bark when you go out, you're going to have to get takeout and bring it back to the room. That's damaging the ability for everybody to travel with their pets," she says. "It's not a right; it's a privilege."

Of course, you don't need only a place to stay, you need places to eat and things to do. Eating with your dog on an outdoor patio is one of the joys of summer, and it's become so common that the publisher of one of the oldest pet travel books, the AAA, added pet-friendly restaurants to its listings this year for the first time.

In many cases, those restaurants are actually skirting local rules, though, so Burkert notes an interesting development: A trend is starting for those laws to change. In California, it's now legal for restaurant owners to allow leashed dogs on their patios. Although we tend to think of California as leading this sort of trend, it was actually preceded by Tennessee, where in 2009, state law was changed so that local jurisdictions could choose to allow dogs on restaurant patios. And just this month, the New York state senate unanimously passed a similar law, which is now being considered by the state assembly.

Burkert speculates that this is happening because tourism boards are starting to recognize that pet travel is a growing market.

"From a tourism perspective, the states are recognizing that people traveling with their pets has become an interesting market to try to attract," she says. "So they are looking at the laws that are making it more difficult, like you can't have dogs at outside restaurants, and they're saying, 'Let's change these laws, and we'll attract more tourists if we become known as a place that is pet friendly.'"