Pets Who Have Called the White House Home 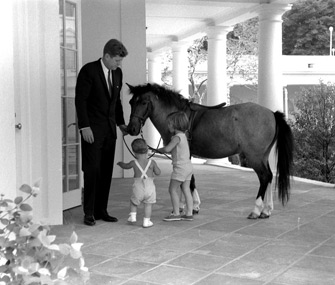 While pets may not be into politics, it’s clear that politicians have long been into pets. The love of animals has been part of first families since George Washington — and is the one bridge that clearly crosses party affiliations.

After all, Democratic president James Buchanan kept an elephant at the White House, a gift from a foreign dignitary before Congress suggested that all such wild gifts be kept at a zoo. Republican president Calvin Coolidge had a donkey named Ebeneezer. So much for aligning pets with party affiliations.

With Election Day on the horizon, we know there's one thing we can all agree on — whether you're voting for Hillary Clinton, Donald Trump or a third-party candidate — the White House has certainly had some adorable and fascinating dogs, cats and well, other "pets."

Presidential pets have come in all shapes, sizes and species, as evidenced by the following stories:

The Pony Healer: Quentin Roosevelt thought his brother, Archie, would recover from the measles faster if he could only see Algonquin, his favorite pony. With the help of a White House footman, Quentin sneaked the pony into an elevator and brought him to his brother’s room. While Archie did smile, the boys’ father, President Theodore Roosevelt (1901–1909), did not. Ponies were strictly forbidden in White House bedrooms from then on.

A Ram-Charged Pickup: President Benjamin Harrison (1889–1893) had a pet goat named His Whiskers, who his grandchildren liked to hitch to a small cart to ride around the White House lawn. On one such occasion, His Whiskers spotted an open gate and accelerated through it, charging down Pennsylvania Avenue with the children. The president caught up with them a few blocks later to lead them all home.

Have Dog, Will Howl: President Lyndon B. Johnson (1963–1969) welcomed a stray mutt, found by his daughter Luci, to the White House. Yuki was a small, white dog with a talent for singing. In fact, when the first lady traveled to Texas, the president and Yuki would sing to her over the phone.

Dog Goes Missing: His Scottish Terrier, Fala, often accompanied President Franklin D. Roosevelt (1933–1945) on official White House business. Returning via battleship from a trip to the Aleutian Islands, near Alaska, the president noticed that Fala was not on the ship! The battleship returned to retrieve the missing dog, much to the chagrin of some taxpayers.

A Foul-Mouthed Fowl: President Andrew Jackson’s parrot, Poll, reportedly was kicked out of the president’s own funeral for swearing. Jackson (1829–1837) bought the bird for his wife before he was elected president. The bird outlived both of them and couldn’t resist having the last word, so to speak.

Presenting presidents and their families with pets was a proud tradition for many years. Some of the more famous pet presents include the following:

A Golden Retriever named Liberty was a gift from the White House photographer to President Gerald Ford (1974–1977). A beloved first pet, Liberty received cards and letters from across the country when she gave birth to a litter of puppies. When citizens’ requests for a picture of Liberty and her pups came pouring in, Liberty autographed the photos with a special rubber-stamp paw print.