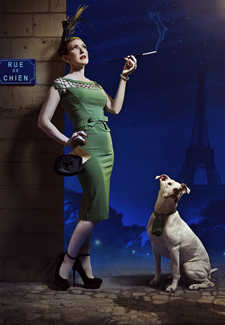 For the last 10 years, Deirdre Franklin has been bringing both beauty and brains to the defense of "bully breed" dogs. Under the stage name Little Darling, theburlesque performerproduced her first Pinups for Pitbulls calendar by begging friends to pose with rescue Pit Bulls. Times have changed: More than 800 people applied to model for the 2015 calendar. Franklin has also been featured on Animal Planet's Pit Boss, and now she's written a book: Little Darling's Pinups for Pitbulls(Overlook Press, $27.95).

The book features photos in the calendar's signature style: exquisitely detailed re-creations of classic pinups but with a twist — a Pit Bull has been added to each one. The book also educates about bully breeds and inspires readers with tales of individual dogs, including stars such as Oogy, who was featured in the calendar and later was the subject of the book Oogy.

Animal advocates often spend their time preaching to the choir, but from the start, Franklin's approach has been to reach out beyond the obvious audience for her cause. Traveling the country doing educational presentations about Pit Bulls, she doesn't go just to pet events. Often she appears at gatherings of people who can relate to being considered outsiders, such as tattoo and comic book conventions. "Some of them love the pinup aspect, some of them love dogs, some just understand what we're getting at — that the dogs are being prejudged like they are, and they can identify because of that," Franklin says.

Pinups for Pitbulls also helps rescues through its Facebook page, where the organization posts bully breed dogs looking for homes. "Thirty-five to 50 dogs a month get adopted through our fan page," Franklin says. "Offering that service has saved a lot of dogs." Behind the scenes, Franklin has been going to grad school and recently got her master's degree in public policy to make sure she'd be taken seriously in her work against breed-specific legislation. "I wanted to be able to talk to legislators and talk to people in office and have them hear me out—and not just think 'Oh, they make a calendar,' " she says. 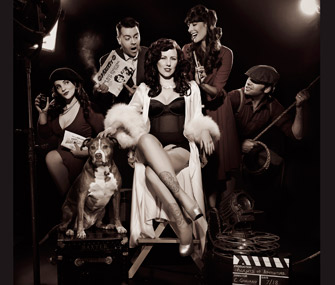 And though the calendar is how the group gets people's attention, Franklin thinks it's not the only thing it does that's distinctive. Just as she doesn't want her dogs to be judged, she thinks it's important not to judge those who start out holding a view different from hers. She's armed with the facts — including that not a single peer-reviewed study has proved that breed-specific legislation works — but the first thing she does is listen.

"We really just want to be there for people and give them an opportunity to address whatever it is they're scared of without being judged by people who just want them to agree with them," she says. "Coming from a human place, a compassionate place, a sympathetic place can help that kind of crossover experience happen."

Visit pinupsforpitbulls.org for more information or to order the book or calendar.