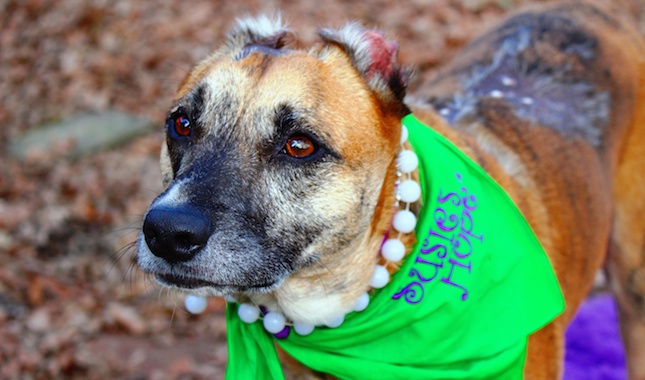 American Humane Association
Susie, a Pit Bull mix who suffered horrific abuse, was rescued and became an inspiration to others.

Susie the Pit Bull mix suffered terrible abuse as a puppy before being rescued and becoming a therapy dog. On Saturday, she was named the American Humane Association’s Hero Dog at a star-studded ceremony.

As a puppy, Susie was beaten and set on fire, then left for dead by her owner at a park in Greensboro, North Carolina. Thankfully, she was rescued and nursed back to health by an animal shelter before being adopted by Donna Lawrence.

Lawrence had nearly lost her own life in a dog attack that left her unable to have children. Together,Susieand her new ownerbecame advocates for abused animals and helpedpass Susie’s Law in North Carolina. The law carries harsher penalties for people convicted on animal abuse charges.

Susie also went on to become a therapy dog and spends her time visiting hospitals, schools and nursing homes to offer hope and inspiration. She was the finalist from the Therapy Dog category.

The winner was chosen through a public vote as well as a panel of animal advocates and celebrity judges. There were eight finalists for the award representing different categories, and each dog had an incredible story.


Kai, a 6-year-old black Labrador Retriever, was the finalist in the Arson Dog category. Kai was rescued from a shelter and went through extensive training to become an arson detection dog for the San Antonio Fire Department. In just four years, she’s taken part in more than 200 arson investigations, sniffing out accelerants commonly used by arsonists.

Xena, a Pit Bull, won the Emerging Hero Dog category. She was given a 1 percent chance of survival when she arrived at a shelter outside Atlanta, emaciated and dehydrated, and defied the odds. She was adopted by the family of a boy with autism who didn’t speak. Once Xena the Warrior Puppy arrived, he opened up and began singing and talking to her. Last year, Xena was named Dog of the Year in the ASPCA’s Humane Awards.

Xxon was the finalist in the Guide or Hearing Dog category. After a January 2010 explosion in Afghanistan killed four of Sgt. Michael Malarsie’s fellow servicemen and left Malarsie blind, Xxon became the only active duty guide dog in the Air Force. Malarsie has now retired and is still paired with Xxon. They’ve become advocates for service dogs for members of the military. 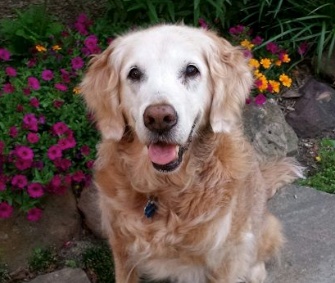 Kota won the Law Enforcement Dog category. In January, Kota was injured while helping the Winchester, Virginia, police respond to a burglary in progress. While he was detaining the suspect in an upstairs crawlspace, the ceiling gave way and the dog fell 8 feet onto a wood floor below. But that didn’t stop him. He helped the officers finish the call despite a severely fractured limb. He’s undergoing physical therapy and hopes to return to active duty.

Chaney, an 8-year-old Lab, took the Military Dog category. He served several tours in Iraq and Afghanistan as an explosives detection dog with the Marines before retiring last year. He was adopted by one of his former handlers, and together they volunteer for a nonprofit called Retrieving Freedom Inc. The group trains service dogs for disabled veterans and kids with autism.

Bretagne, a Golden Retriever, represented the Search and Rescue Dog category. She recently turned 15 and is the last surviving dog to have worked at Ground Zero in the days after the Sept. 11, 2001, attacks. She was also deployed at the 2002 Olympic Winter Games and after Hurricane Rita in 2005. Now retired in Texas, Bretagne visits elementary schools to help first graders learn to read.

JJ Krawczyk won the Service Dog category. He was rescued from a shelter and trained to assist a young girl with a rare condition known as mastocytosis. The condition can cause severe reactions for her, and JJ Krawczyk can detect when potentially life-threatening reactions are about to occur so her parents can get her the help she needs. The girl’s doctors even requested the dog be present in the operating room when she needed surgery recently, to alert them to any problems.