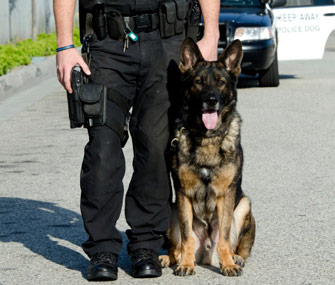 Thinkstock
Supporters of Aron's Law hope it will help protect other police dogs, like the one pictured here.

It was nearly 17 years ago that a Tennessee police K9 was shot and killed during a bank robbery, saving the lives of fellow officers by distracting the culprit. Now his death may lead to a change in the state law. If the state legislature passes “Aron’s Law,” it would become a felony to intentionally kill a police, fire or search-and-rescue animal. "This bill is named Aron's Law, but this is for every dog that's ever been killed in the line of duty, injured in the line of duty, and it's for every K9 that's working out here now,” said Aron’s partner, Officer Terry Burnett. He said he hopes a stronger penalty might make a criminal think twice about harming a working dog. — Read it at USA Today