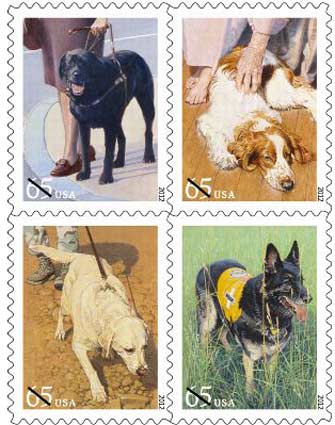 Here’s a postage announcement that’s sure to get an animal lover’s stamp of approval. On Friday, the U.S. Postal Service released its "Dogs at Work" series of 65-cent stamps. The series depicts a guide dog, a therapy dog, a military dog and a search-and-rescue dog to “celebrate the enduring partnership between dogs and people.”

The stamps feature original paintings by John Thompson, a professor of illustration at Syracuse University’s College of Visual and Performing Arts.

Thompson said he used canine and human models from the central New York area for the works, which were designed by the postal service’s art director, Howard E. Paine.

The stamps were released in Merrifield, Va., at an unveiling attended by some of those honored, including members of the Fairfax County Search and Rescue Team, which has helped in national and international disasters.