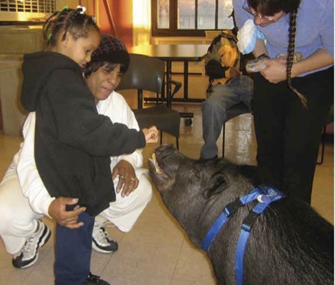 Sherman snacks on a cookie while on the job as a therapy pig.

What It Takes to Own One

To be sure, pig ownership isn’t a walk in the park. In fact, both Brady and Merta stress that overzealous owners tend to get in over their heads, and then abandon pet pigs, leaving many up for adoption.

To get Sherman to and from, Merta has tricked out her SUV with a telescoping dog ramp that folds out for Sherman. Her bed also has a ramp, so Sherman and her other pig, Sammie, can sleep with her. “I’m pretty much ham-sandwiched between them,” she says.

As for the myth that pigs are dirty, Merta can pretty much lay that falsehood to rest. “They’re clean, they don’t get fleas and they only shed twice a year,” she says.

In fact, after she got him accustomed to water, Sherman took to jumping in the bath himself. “I put his Cheerios in the tub, and he climbs right in,” she says. “Of course, they get a little soapy, but it works."

Both Buttercup and Sherman are potty-trained, and neither has ever had an accident in the house. Pigs also live up to their reputation for being quite clever: Merta taught Sherman how to sit “in three hours,” she says. “He can shake with either hoof. And he knows the word cookie."

There are a few big differences between pigs and more traditional fuzzy companions. For one, they’re not as affectionate as dogs. “He’s not going to come up to you and squeal, 'Yay, Mom’s home!' ” Brady says. “But he will rub up against my leg to show affection."

And both owners stress that pigs have a serious stubborn streak. “They are very, very food-driven,” Brady says. Merta agrees: “It’s a bargaining relationship."

This can be true with your neighbors, too. “You need to check the ordinances in your area,” says Brady, who's never had a problem with neighbors. But Merta has heard many cases of residents complaining about pet pigs, which is why you need to be sure that your yard is zoned properly for pig ownership.

Finally, there’s the question of size. Most potbellies, Merta says, clock in between 110 and 150 pounds. In other words, even the “miniature” types don’t stay small for long.

"People think that they can just hold a pet pig,” she says. “The biggest thing I get is ‘Whoa, they’re that big?’ ”