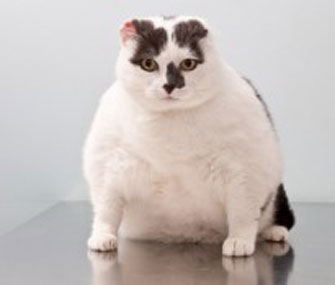 PDSA
Fifi tips the scales at 21 pounds — 107 percent above her ideal weight.

A “custard cream–loving” dog named Alfie and a Lab named Romeo, who's enjoyed a few too many roast dinners, are just a couple of the animals who will take part in a British weight-loss competition for portly pets reminiscent of The Biggest Loser. The Pet Fit Club, an annual contest held by the U.K. veterinary charity PDSA, includes 18 finalists — 11 dogs, five cats and two rabbits — who are battling the bulge. Their combined excess weight: 336 pounds.

PDSA’s vets will advise the pets’ owners on how to get their four-legged companions back on track with specially tailored diets and exercise programs.

Maverick’s owner, Dee Doyle, told Scotland’s STV that the cat's weight has ballooned since she took him in as a stray two years ago.

"Maverick’s extra weight is really affecting his well-being,” said Doyle. “He has trouble breathing and spends most of his time sleeping. I was really shocked when the vet said he is the biggest cat he’d ever seen.” 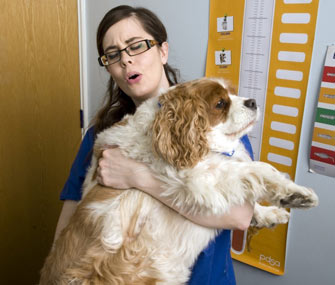 At 21 pounds, a feline contestant named Fifi is more than twice her ideal body weight. It's hard to believe, considering that she was malnourished when she was found as a kitten by owner Monica Bottomley, according to Sky News. Bottomley entered Fifi in the contest when all other attempts to get Fifi in shape failed.

“Excess pounds can contribute to a number of serious health conditions and, sadly, it does reduce life expectancy,” said Dr. Sean Wensley, a PDSA senior veterinary surgeon, in a statement. “But the good news is that it’s never too late to make positive changes to a pet’s diet and lifestyle.”

As part of the program, PDSA wants to shed light on the problem of obesity in pets. According to the group, more than a third of British dogs are overweight, as well as about one in four felines.

The competition runs until September, when the winner gets the grand prize: a stay at a Four Seasons hotel, worth $800 — and a year’s worth of pet food.