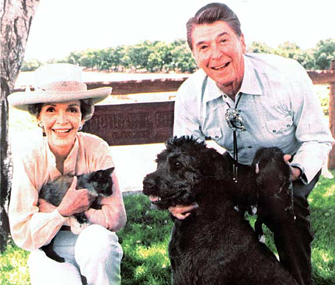 To most museum-goers, the words “animal exhibit” probably conjure images of dinosaur skeletons and stale lectures about evolution. Well, not anymore. A new generation of museum directors is reinvigorating the idea of animal exhibits — with off-the-wall museums celebrating presidential pets, furry sailors, the human-animal bond, animal crimes, mummies and even sex.

We got the scoop on these quirky pet and animal museums — some of them aren't even open yet! Get ready.

Pets Fit for a President

Claire McLean got hooked on presidential pets back in the Reagan administration, after she visited the White House to groom Lucky, the Reagans’ Bouvier des Flandres dog.

"They have museums for just about everything, including presidents,” she says. “So why shouldn’t their pets have a museum also?"

She founded the Presidential Pet Museum in Williamsburg, Va., in 1999. Though that location closed in the fall, McLean will reopen the museum next year in Glen Allen, Va. Its exhibits use photographs, statues, trivia, memorabilia and commercial items to honor the furry members of the first family. One of McLean’s primary goals is to teach visitors, particularly children, that responsible pet ownership starts at the top. The museum features portraits of three dogs — Barney Bush, Miss Beazley Bush and Lucky Reagan — made with their own hair clipped from a White House grooming. McLean hasn’t yet had any luck getting some luxurious locks from Bo Obama.

Another exhibit shows off a cowbell that belonged to Pauline Wayne, the last cow to ever reside at the White House. Pauline was Howard Taft’s personal milk cow, since the president liked to have fresh milk every morning. The museum also features a statue of Tiny Tim, a Chow owned by Calvin Coolidge, and a life-sized bronze statue of George W. Bush’s Scottish Terrier, Barney. The sculpture was crafted by Richard Chashoudina, a renowned dog handler who won Best in Show at the 100th Westminster Dog Show in 1976.

"There are over 400 animals that have been in the White House,” McLean says. “Either walking or scooting or crashing across the lawn."

Working as an animal law attorney in Illinois, Amy Breyer couldn’t shake the feeling that the main concern of the 12 jury members in each courtroom was how soon they could leave. She still wanted to advocate for animals but realized that litigation wasn’t the way to go about it.

“It occurred to me that if I wanted to get people engaged, and thinking about this underlying concept, people needed to look at it on their own time, at their own pace, and think about it in their own way,” she says. “So I mulled it over, and it coalesced into a museum.”

The Animal History Museum, of which Breyer is now president, will focus on exploring the human-animal bond, from exotic pets to therapy dogs. Exhibits will delve into animal intelligence, animals in television and film, vegetarian and vegan food trends, animals in religion and animal welfare and law. Breyer says she wants the museum to be a “good place to learn and think in a nonjudgmental, no-pressure atmosphere.”

She hopes to open the museum in a small space in Los Angeles by the end of the year. The organization has already released its first online exhibit, a collection of wildlife photography. Valentine’s Day and shelter pet photo contests on the museum’s Facebook page have drawn supporters, and the group plans to begin museum-sponsored lectures and events in the coming months.