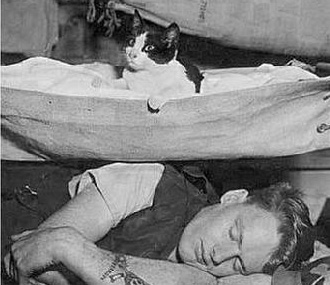 Courtesy of the Museum of Maritime Pets

The Museum of Maritime Pets in Annapolis, Md., aims to honor animals who sailed the high seas. It’s the brainchild of Maryland resident Pat Sullivan, who owns a pet-sitting business and has spent years collecting photographs, books, diaries and artwork about maritime pets. She has registered the museum as a nonprofit and assembled volunteers and a board of directors. She plans to open a physical museum soon.

"It's known that as soon as man went to sea thousands of years ago, he usually had animals with him," Sullivan says. "So it's not only of historic interest, but it's also a very emotional story to tell, too: Why has man found it comforting to have animals with him at sea?"

For now, the material is presented in lectures the museum hosts about history and current animal welfare issues, and online at a website Sullivan started in 2006. The museum will feature stories of ship mascots, military carrier pigeons and pets who offered companionship to sailors recovering from battle wounds. Among the featured animals is a famous mixed-breed dog named Sinbad, who served during World War II on the Coast Guard cutter Campbell and achieved the rank of chief petty officer.

You might be surprised by the range of museums that feature animal exhibits:

Check out this video about the Presidential Pet Museum, and tell us: What quirky animal museum would you like to see open next?