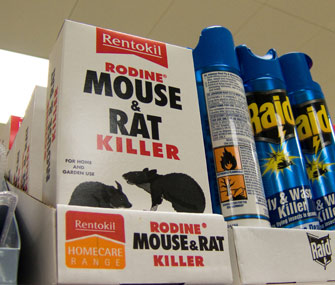 The Environmental Protection Agency recently cancelled the sale of the most toxic second-generation (more recently developed) anticoagulant rodenticides to the general public. The action removes from the consumer market all products that do not comply with a 2008 EPA safety review that set more stringent standards for the use of rodenticides.

Does this mean the nation's pets will be safer? The answer to that is both yes and no, according to veterinary toxicologist Dr. Tina Wismer, who is medical director of the ASPCA's Animal Poison Control Center (APCC).

Compared with first-generation anticoagulant rodenticides, second-generation anticoagulants are more deadly to pets, wildlife and children because they require only one feeding to be highly toxic. First-generation — or older — anticoagulant products require multiple feedings to be toxic. It would seem to be good news that the more toxic product will be off the market, but Dr. Wismer and other toxicologists expect that consumers will turn to a different rodenticide that was not included in the EPA cancellation: bromethalin. Bromethalin is not an anticoagulant but a nerve toxin that causes sometimes subtle neurologic and respiratory signs in pets.


"One of the 'nice' things about anticoagulant rodenticides is that they have an antidote," notes Dr. Wismer. "Bromethalin does not." On the positive side, however, Dr. Wismer notes that the changes being implemented by the EPA will reduce consumer access to loose bait, change the form of the baits from loose pellets to blocks and require the use of child- and pet-resistant bait stations to make access more difficult.

The Dangers of Bromethalin Poisoning

Bromethalin acts by an unusual mechanism, causing swelling around the brain, and it can't be detected through bloodwork, at least not immediately, says veterinary toxicologist John Tegzes, professor of toxicology at Western University College of Veterinary Medicine in Pomona, California.

"Often by the time clinical signs appear, it's very difficult to treat," he says. "The only good news about it is that dogs need to eat a bit more of it than they would the anticoagulant rodenticides. So not every dog who eats a little bit will become sick from it."


Bromethalin typically causes changes in behavior: A dog who has ingested bromethalin may press his head against a wall or furniture, or circle as he walks. Seizures, depression, and not eating or drinking can also be signs of bromethalin poisoning. Supportive treatment may save the animal's life if he is taken to a veterinarian early enough, but no medication can counter bromethalin's effect.

Anticoagulants Are Still a Concern

First-generation anticoagulant rodenticides available to the general public (and second -generation products, which professional exterminators will still be allowed to use) prevent blood from clotting, causing microhemorrhages in the gastrointestinal tract, chest cavity, brain or elsewhere in the body. Signs of ingestion can include difficulty breathing, a rapid heart rate and unusual inactivity.

"The good news about anticoagulants is that if the owner notices subtle changes and gets a pet to the veterinarian and he does some bloodwork, there is an antidote," Dr. Tegzes says. "You can transfuse the pet with whole blood and start the antidote. Many of these dogs will easilyrecover once they've been sick."

Though rodenticides of any kind can make pets very sick or even kill them,rodenticide concernsmade up only about 5.5 percent of the calls to the APCC in 2013. Approximately 68 percent of those calls were about anticoagulant rodenticides, says Dr. Wismer. Veterinarians will be watching closely to see if the number of reported incidents goes up or remains the same.

If you think your pet has ingested rat poison, call your veterinarian immediately. "There are things that can be done right then," Dr. Wismer says. "Do not wait until the animal develops signs." The message to pet owners in light of the EPA's action is to be extremely vigilant about potential exposure your pet may have to rodenticides and act promptly.