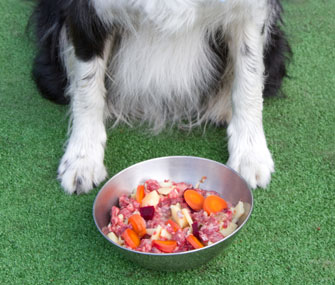 A small but enthusiastic group of people have come to believe that feeding raw food to their pets is a good idea — for everyone. They argue in favor of “feeding raw” and reject “junk food” commercial diets because of the “fact” that dogs and cats evolved as carnivores eating raw foods. Proponents claim that eating these diets improves coat and skin quality, increases pets’ energy levels and reduces disease.

These claims, however, don’t tell the whole story. For example, while it is true that the ancestors of modern dogs and cats ate raw food — which they also hunted, caught and killed — life for them too was most likely “brutish, nasty and short,” which is hardly the life of most pets today. Enthusiasts also often neglect to mention the risk of infectious disease associated with feeding raw foods, or the absence of evidence of any documented benefits of raw food diets to pets when compared to feeding satisfactory (complete, balanced, palatable, digestible and safe) commercial foods.

Unfortunately, little unbiased scientific evaluation of raw food diet claims has occurred, which permits proponents and opponents of this method of feeding to continue to engage in largely emotional arguments, without any effort to understand what the appeal is of preparing raw food for pets — something that was happily abandoned by most pet owners generations ago. The observation that most pets in the United States are living longer and generally healthier lives suggests that their nutritional status is adequate. And rather than debating cooking preferences or diet ingredients, the best way to test the quality of a diet is by looking at the outcome in your pet. We have done thousands of diet histories at our hospital over the years, and have yet to be able to predict the diet that is being fed to a dog or a cat based on our evaluation of the animal. You can also easily test this on your own: Just decide for yourself what kind of diet you think the next 100 (or so) healthy pets you see eat, and then ask the owners what they actually do feed.

Why the enthusiasm by some owners for “alternative” diets? This question has been investigated in human medicine to attempt to understand the appeal of alternative therapies. Some believe that medicine has lost its holistic perspective, leaving some people to seek help from caregivers who spend the time to get to know their clients and listen carefully to their concerns. Veterinarians who practice this approach to medicine also may try to treat the whole situation rather than only the symptoms the patient presents with, an approach that is valued by some clients. The interest in raw and other alternative diets also may not truly reflect dissatisfaction with commercial diets, but instead the enjoyment certain owners take from preparing food for their pets. Many owners see their dog or cat as one of the family. For some of these owners, the "cultural" aspect of thoughtfully preparing a meal as opposed to mindlessly pouring dry chunks into a bowl is appealing.