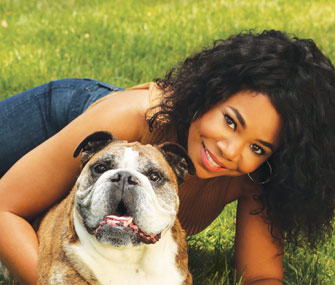 Regina Hall is probably recognized most for her role as Brenda Meeks in the horror parody Scary Movie franchise. This talented and versatile actress tends to be known for her comedic roles, appearing in movies such as About Last Night, Think Like a Man, and Barbershop: The Next Cut, as well as in TV shows like Grandfathered, where she recently starred as John Stamos’s well-matched girlfriend.

But she has a serious acting side too, as evidenced by her recurring roles as deputy district attorney Evelyn Price in Law & Order: LA and lawyer Corretta Lipp in Ally McBeal. And you’d better believe that her new thriller When the Bough Breaks is no joke.

One thing you may not know about her from her professional life is that she adores animals — in particular, her 11-year-old Bulldog, Zeus. We visited her at home in LA to get a glimpse into the life she shares with this lucky dog and learn more about why animals mean so much to her.

“I’ve had this little gorgeous piece of fur since he was a baby,” Regina says. Zeus is the first dog she’s had as an adult, and she couldn’t be happier that he’s in her life.

When the actress was young, Regina used to frequently come home with dogs she wanted to rescue. She remembers her mom telling her, “Regina, we cannot keep these dogs. You have to stop.” “My mom was allergic to dogs, so we never could really have them,” Regina says. She has felt connected to dogs since she was little, so she was devastated when she couldn’t keep them.

Regina also had a habit of calling charities like Feed the Children because she wanted to help save kids. “I always called and adopted a child,” she says, “and my mom would be like, ‘I can barely feed you. Stop.’ And I would reply, ‘For one penny a day, mommy, you can feed Odessa.’ If there was something I could do … how could I not?”

Regina originally thought she was going to get a French Bulldog, the Bulldog’s smaller cousin. But then when she went to pick up the Frenchie, she says Zeus was “just pawing all over me, like, ‘I’m your dog.’ They say dogs choose you, and he was like, No, no, no. Yours is right here.”

After Zeus picked her, Regina wasn’t sure what to name him at first. His mother’s name was Zee, and his father’s name was Titan, so the puppy had been named Titan II. Regina thought he deserved his own name. While mulling over choices with one of her friends, she decided to stick with Greek mythology.

Her friend suggested Zeus, and Regina realized that was his name. “I feel like I created a monster because he does think he’s a god now, and I feel like that is partly my fault,” she says. “At the same time, I feel like he picked his name — He’s a Zeus!”

Regina has made sure Zeus is well socialized. “He even travels with me when I shoot,” Regina reveals. “He flies with me. He’s really great except when the food comes. Then he gets a little antsy, so I take apples and other treats for him, so that while people are eating, he can eat.”

Zeus has his own suitcase, which Regina packs with his treats and a travel set of food and water bowls. “Once they go in the suitcase, he knows he’s going,” Regina says. “When he’s not going, he paces the whole night before because he knows I’m leaving.” When she can’t take Zeus with her, she has someone stay with him at her house.