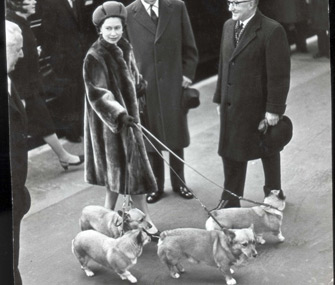 Queen Elizabeth II is famous for having her beloved Corgis by her side. She’s had more than 30 of them throughout her life, beginning when her father brought one home from a local kennel in 1933, when she was a young girl. But we may be seeing the end of an era. Reports say the 88-year-old queen doesn’t plan to take on any more pets because of her advanced age. "The fact is she worries about too many dogs around her feet and the danger she will trip up and hurt herself badly," an unidentified member of the royal court told the U.K.’s Express. "Her corgis are getting on a bit and move along at a sedate speed, but a young dog would obviously be very lively and much more active. Her main fear is that if she fell and broke her arm or even a leg she would not be able to perform her duties for many weeks if not months, and that would upset her greatly." Her current Corgis, Willow and Holly, appeared in a video shown at the opening of the London Olympics in 2012. — Read it at People Pets