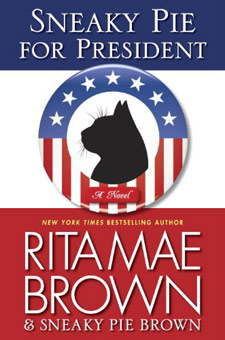 Best-selling author Rita Mae Brown has penned everything from Civil War–era novels to a highly successful cat mystery series. But this is the first time that she's ventured into the political arena. Well, to be completely accurate, this is the first time that she and her writing partner, a tiger-striped cat named Sneaky Pie, have done so. The result is a new book aptly titled Sneaky Pie for President, with the catty subtitle, “Ask not what your cat can do for you. Ask what you can do for your cat.”

On the eve of Election Day, Vetstreet caught up with Brown to chat about the new book and her feline sidekick's political musings.

Q. With the election approaching, how do you and Sneaky Pie view politics?

A. Rita Mae Brown: "I’m sure a lot of your readers feel as we do. We’re tired of all the posturing and the doing nothing by politicians. In fact, we feel that Washington, D.C., should be renamed Egolopolis. Sneaky Pie and I believe that if the politicians just get out of the way, Americans will solve our problems. I don’t care if you are a mechanic, a farmer or you work in a supermarket, you have a lot of practical experience. People don’t always give themselves credit for how smart they really are."

Q. Why did you start a mystery series starring a shelter cat named Sneaky Pie?

A. "I never dreamed I would be doing this, but it goes back to 1988. I was a classics and English major in college. I read Greek and Latin. I was really on my way to becoming an insufferable literary snob. I was working in Hollywood at the time and doing really great. I loved it, but we went on strike in 1988 and it lasted for almost a year. I wasn’t making any money, but the bills arrived like clockwork. I thought, What am I going to do? And my cat said, 'Write a mystery series.' I had always regarded mysteries as the suburbs of literature, but then I read Agatha Christie and PD James, and thought, 'This really is fiction. Good fiction.' And the cat said, 'Just leave it to me.' So I sat down and basically took dictation."

Q. This marks the twenty-second book in the Sneaky Pie series but the first with a political theme. Why should people vote for a cat for president?

A. "There is nothing in the constitution that says you must be a human being to be president. You just have to be born in the United States, and be 35 years old. In cat years, she is. In the spirit of full disclosure, this is actually Sneaky Pie II. She was born in a cardboard box and taken to a shelter in Virginia, where I adopted her. She is very candid and genuinely cares about all animals. And Sneaky Pie’s campaign motto says it all: 'I can’t do any worse.'”